Saint Justin of the Trinity - eBook 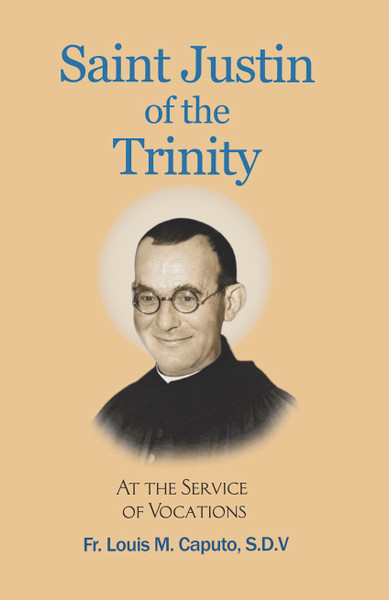 Saint Justin of the Trinity - eBook

Saint Justin of the Trinity

Using his life as an example, author Father Louis Caputo hopes St. Justin may be a source of inspiration for many people and will show people that every life is a vocation.

Fr. Louis M. Caputo, S.D.V was born in Italy on March 3, 1941. In 1953 entered the Vocationary of Pianura as an aspirant Vocationist and lived two years in the same house where St. Justin lived. He became a professed member of the Society of Divine Vocations, the Religious Order founded by St. Justin. On May 27, 1967 he was ordained as a Vocationist Priest in Newark NJ. He served in St. James Parish in Penns Grove NJ and then at Our Lady of Perpetual Help and St. Michael in Newark. Simultaneously, he completed his graduate studies at Rowan University and taught in Penns Grove High School, St. James High School in Carneys Point, Webster Junior High and St. Michael in Newark. He opened a Vocationist Mission in Nigeria and India and in the year 2000 was elected Superior General of the Vocationist Fathers and moved back to Italy for 12 years. During his two terms tenure as Superior General he opened Vocationist Missions in Columbia, Ecuador, Chile, Madagascar, Indonesia, United Kingdom. He collected and published 26 volumes of St. Justin writings in Italian and coordinated and presided over the celebrations for the Beatification of St. Justin. He published the Biography of Blessed Fr. Justin on the occasion of the beatification, and later published the same biography in English on the occasion of his 50th anniversary of priestly ordination. He has translated and edited 16 volumes of Fr. Justin writing in English. He is the last Vocationist Father that knew personally St. Justin, founder of the Society of Divine Vocations, whose members are known as Vocationist Fathers.

Saint Justin of the Trinity

It's Time for a Cure: Your Guide to the Best Health and the Longest Life Possible - HB

God's Welcome: A Co-Creative Vision of the Spiritual Exercises of St. Ignatius for Women

Poetry in the Key of Black

An Adventure With SMOOCHIE- eBook