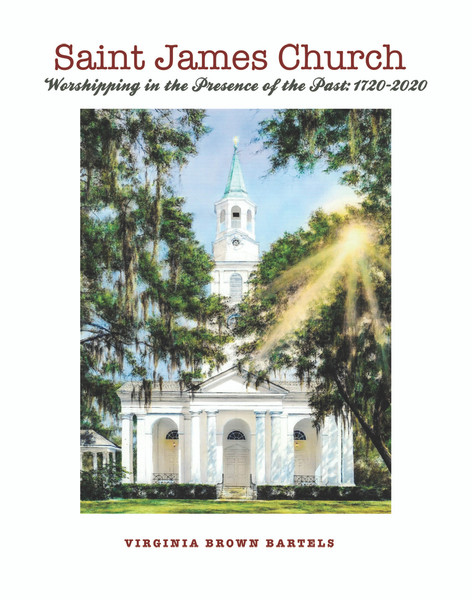 Virginia Brown Bartels moved to James Island when she was twelve years old and grew to know and love the area, its people and its history. She has worshiped at Saint James since 1982 and has been blessed to know many of the priests and parishioners personally. As a Winthrop graduate and an English teacher in Charleston County’s public schools for over thirty years, Bartels was privileged to teach primarily American literature and help create and sustain the Teacher Cadet Program. Her educational career, which spanned over a period of forty years, included initiatives in teacher recruitment and teacher training. Together, she and her husband Lt. Col. Richard “Dick” Bartels, have five children and ten grandchildren. They treasure their family gatherings, mountain cabin, traveling, gardening and worshiping at St. James.

"Saint James Church: Worshipping in the Presence of the Past: 1720-2020 chronicles the history of a South Carolina sea island church for 300 years from its inception in colonial America through modern 21st Century America. Meticulously researched and documented, the book is full of fascinating anecdotes discovered in the minutes of congregational meetings, old vestry minutes, annual church reports, local newspaper articles, cemetery records, journals, diaries, letters, and other books of local history. The book tells the history of Saint James Church in parallel with the significant defining events in American history, beginning with the colonial era, followed by the American Revolution, the antebellum years of the South, the War Between the States, Reconstruction, two World Wars, the Civil Rights movement, and up into modern history. The Saint James Church sanctuary has been rebuilt six times, but the congregation has survived multiple wars, hurricanes, fires, and a major earthquake. The author captures the culture and natural beauty of the sea islands with their creeks, saltwater marshes, live oaks, and Spanish moss, as well as the lives of the people who have worshipped at Saint James. I grew up on James Island, but I learned far more from this book about my childhood home than from any other source." ~ Dr. James A. Brown (medical missionary in Cameroon, Africa)

"In her book, Saint James Church: Worshipping in the Presence of the Past, Virginia Brown Bartels provides an interesting history of Saint James Church. She gives a clear view of all the challenges past generations faced in forming a church. Through prayer and the divine works of God, the church survived war, fires, financial problems, disagreements, sickness, securing priests, and many more dilemmas. Saint James Church is now 300 years old and continues to touch the lives of its members and the community. Thank you, Virginia, for utilizing your time and research to give us the story of Saint James Church. What a fascinating story!" ~ Donna Lewis

"What strikes the reader is the research the author did.  So many sources!  So much detail!  Besides the history of the buildings, graveyard and other properties, one gets insight into the social evolution of the congregation...especially controversial decisions.  A fascinating read whether you're a St. James member or "merely" someone interested in James Island and the maturation of the Episcopal Church.  Colorful "characters" and good stories about them." ~ Will Felts

"Very thorough and  personable.  A must-read for anyone who is interested in the history of the Sea Islands of the Low Country.” ~ Pamela Dickson

"If you are interested in the history of one of the oldest Episcopal congregations on James Island and thus the early history of this Sea Island community, then this new book by Virginia Bartels is one you will surely enjoy.  Full of colorful and inspiring stories from over 300 years of growth both physically and spiritually, it is well referenced and easy to read." ~ Frances Egleston

"Saint James Church: Worshipping in the Presence of the Past will be a valuable resource for anyone interested in the history of the Lowcountry.  Saint James Church has played a central role in the life of James Island for 300 years. Virginia Bartels has done painstaking research to mine thoroughly the life of the congregation from a small house church with an occasional priest to the thriving congregation it is today. What makes the book special to me is the author’s spiritual vision for the way God has been at work at Saint James, and always for good, during periods of want and periods of plenty- wars, fires, hurricanes, prosperity… the author’s understanding that it has been God always calling and shaping the people to be ambassadors of faith and good will on the island. Virginia Bartels is an able historian who is a good story teller.  And her bias is clear:  she loves God and she loves Saint James.  Which makes the book good history, good stories, and through it all a testimony to a good God. I highly recommend this book." ~ The Rev. Louise Weld

"Virginia Bartels has provided to the community of James Island an authentic gift of history that spans an interval of 300 years and details how it has shaped the lives of many people. It covers both the spiritual and secular aspects of the forces that influenced and affected the congregation of Saint James Church throughout each generation of worshippers. Through countless hours of research, Virginia has accomplished an amazing compilation of information and assembled it into a format that brings it forward in a manner that only her talented background could provide. This is by far the most intensive documentary ever undertaken and by far surpasses previous versions on the life of the church. You will receive a factual glimpse of the past, present, and things to come. Please don't miss this opportunity to fully appreciate how God's presence in the lives of so many people throughout these years has sustained and guided us to where we stand today." ~ Clark Morrison

Knell of the Union

Original Songs and Poetry: Coloring Music to Move the World and Touch the Hearts

Wild Faces in Wild Places: Stories and Inspirations of a Wildlife Photographer