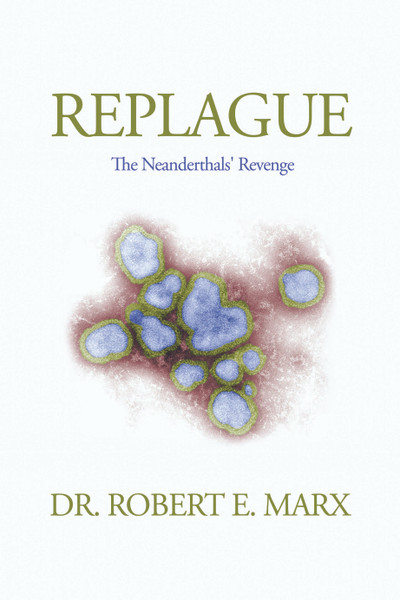 Replague: The Neanderthals’ Revenge depicts an ancient virus from prehistory that becomes unfrozen to haunt modern man and stress societal norms and medical acumen. It describes the chronologic story from the last ice age to the present and how the introduction of a new disease has devastated people and cultures in the past and even to us today, also medical intrigue and the ultimate enemy, Big Pharma, with their greed and arrogance.

Dr. Robert E. Marx’s message is relevant due to the emergence of several recent epidemics and pandemics new to modern society, i.e., HIV, SARS, EBOLA, and of course COVID-19. His book also delves into the medicine, the characters, the insight into how the CDC really works, and the desire of one surgeon to expose a corrupt drug company and the clever way he accomplishes it.

We need to study history so that we don’t repeat its mistakes. Many drug companies put profits ahead of patient safety and cover up side-effects. Future pandemics and plagues are on their way and pose a distinct threat to our way of life and global stability.

Dr. Robert E. Marx is a Chicago native who did his undergraduate education and professional education at Northwestern University in Evanston/Chicago, IL, and followed with residency and fellowship training at the University of Miami/Jackson Health Systems in Miami, FL.

As a specialist in oral and maxillofacial surgery, he spent 13 years as an active duty officer in the United States Air Force and later served in Operation Desert Storm. He received the Meritorious Service Ribbon and the Legion of Merit Medal among other military awards. He is known as the discoverer of Platelet Rich Plasma (PRP) and in-situ tissue engineering and is known as one of the world’s most prominent stem cell researchers and bone growth factor specialists. He has also pioneered other new concepts and treatments for pathologies of the oral and maxillofacial area as well as new techniques in reconstructive surgery.

The Paradigm Shift: A One Hundred Day Journey

An Octopus Named Olivia: What Could You Do With Eight Arms?