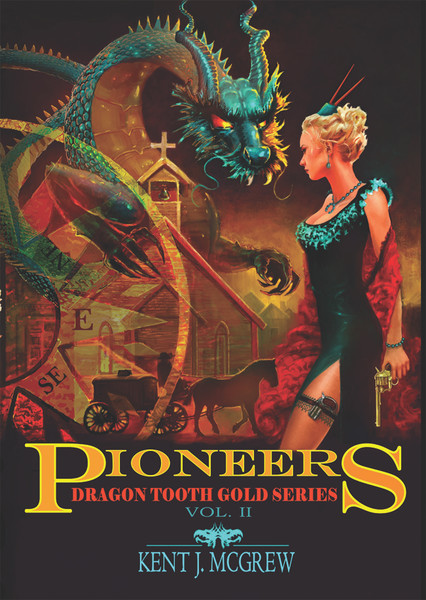 Pioneers: Volume II – Dragon Tooth Gold Series finds the second generation young Callahan adults midsummer, 1860. The nation is on the brink of Civil War. Eli, the oldest, and the twins, Roland and Jacques, join the Army Supply Service under the pressure of their mother Anna and their grandmother Denise. Still serving their country but safe from the front lines if war should break out, they work for the Quartermaster at Fort Leavenworth on short hauls to supply bases on the Santa Fe Trail. Disaster strikes in the form of a tornado that kills their parents and severely injures their younger sister, Suzette. After the burial of their mother and the abandonment of the search for their father, the boys take a contract to deliver a heavy load of supplies to the Army garrison at Santa Fe. They head to Fort Leavenworth to load up and head west. Denise plans to take Suzette by ship to meet up with the boys in Los Angeles, however, Suzette has plans of her own. She runs away and waits for her brothers on the trail.

Pioneers is cast in the 1860’s with the country on the brink of the Civil War. The Callahan children, our young pioneers, experience the Santa Fe trail with all the perils of the times: renegades, Indians, storms, disease and danger greeting them at every turn of the trail.. Crossing the trail took four months on the average and many fell by the wayside, never to realize their dreams of a new life in the west. The history and living the reality of the greatest migration in American history is woven with historical individuals and laced with the sights and the history of the times. I want my readers to experience the tenacity of our ancestors and appreciate the will and endurance that it took to simply survive, let alone succeed at a new life. My characters are unique in that they were wealthy with the riches of their father’s estate. They could have chosen an easy life but they chose the more difficult path. These young heroes are meant to be role models for the young, adopted sons and daughters of the aged. Through action packed adventure, everyone has the opportunity to experience Horace Greeley’s sage advice, “Go west young man, go west.”

Kent McGrew has taken a refreshing break from years of technical writing to bring his readers Dragon Tooth Gold; an epic historical fiction of gold mining in the American West. Born during WWII, McGrew was raised by immigrant grandparents in the Sacramento Valley. He was drawn into mining partnerships with his father at age fourteen where he discovered the science that should be the bulwark of every effort. After three mining venture failures, he attended the Montana School of Mines for degrees in Mineral Dressing Engineering, an odd corner of extractive metallurgy recovering minerals and metals from ores.

The mining vagabond settled in Congress, Arizona twenty-eight years ago when he met Sally - a woman he couldn’t pass up - his gold fever cured forever with this amazing find.