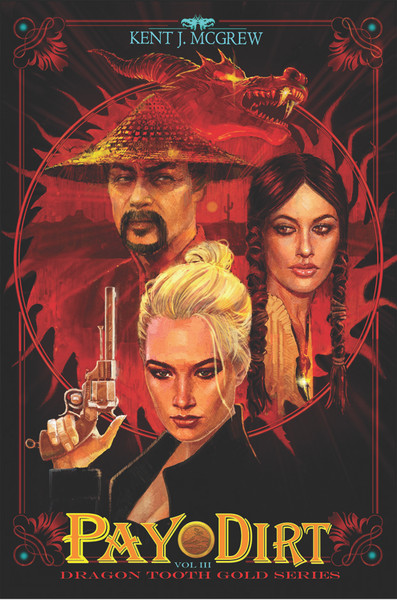 Gold is where you find it; the time-honored mantra of the weekend prospector to the seasoned professional; is at best only a half-truth. Gold is where the planet, through its myriad, inanimate geological processes, choose to leave it. The Dragon Tooth Gold Mine was no exception to the science underlying the geological process of gold deposition, however, only difficult to find microscopic gold on the surface masked the deposit from the greedy eyes of the early prospectors.

But it's not only "The Luck of the Irish" that brings the young Callahans to one of the richest gold mines in the Arizona Territories. Through the patience and perseverance of an Indian woman that Eli Callahan takes for his wife, the secrets of the red mountain are unveiled layer by layer. From gold pan to arrastra and sluice; to underground mining, stamp mills, and amalgam tables, the wealth of the Dragon Tooth Mine fuels the Federal money presses of the Civil War.

There is more in the mine than gold; the remains of dinosaurs that roamed the earth sixty-five million years ago also await for discovery. More than fossilized bones, the unique discovery fans the fires of news craven printing presses worldwide.

Destiny also finds the Callahans. Suzette completes her medical degree; Jacques joins the US Army as a scout; Roland becomes the family's financial manager, and Eli stays on the red mountain and mines the gold.

Historical fiction is the author’s technique to bring to light the thrill of discovery and the hardships of mining in the Arizona Territories in the mid 1800's. Action packed adventure and interaction with the historical figures of the times provides a unique insight into the men and women that shaped Arizona into the mining industry it enjoys to this day.

Ahead of their times, the Callahans continue the legacy of their father, building wealth and security through hard work, fair labor practice emancipating slaves, and sharing the wealth through shared ownership with their workers.

Kent J. McGrew has taken a refreshing break from years of technical writing to bring his readers Dragon Tooth Gold; an epic historical fiction of gold mining in the American West. Born during WWII, McGrew was raised by immigrant grandparents in the Sacramento Valley. He was drawn into mining partnerships with his father at age fourteen where he discovered the science that should be the bulwark of every effort. After three mining venture failures, he attended the Montana School of Mines for degrees in Mineral Dressing Engineering, an odd corner of extractive metallurgy recovering minerals and metals from ores.