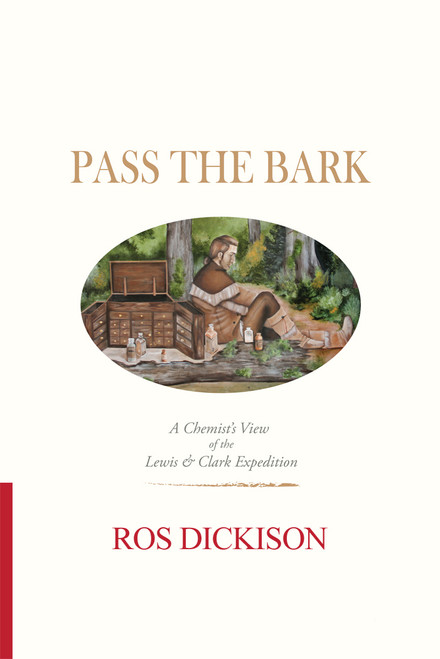 Pass the Bark provides readers with a chemist’s view of the Lewis & Clark Expedition of 1803-1806. No prior knowledge of chemistry is necessary, however; Dickison, with his many years of teaching experience, breaks down an and all scientific terminology so that the reader can fully understand the concepts at hand.

In 1803, President Jefferson sought to fulfill his lifelong dream of exploring the western half of the American continent. The dream involved traveling up the Missouri River in search of a water route to the Western (Pacific) Ocean. To bring this dream to fruition, the president commissioned Meriweather Lewis, William Clark and a band of several dozen men now known as the Lewis and Clark Expedition.

For three years, the men would trek through thousands of miles of uncharted land and rivers. During the physically taxing excursion, the health of the men was of utmost importance. In Pass the Bark, Dickison discusses in depth not only the various medicines Lewis brought along on the expedition, but also the medicines of the Native American tribes encountered en route to the Pacific Ocean.

In addition to learning about the chemistry and origins of these medicines, an authoritative, “Expedition Material Medica” and a “Native American Medica” will provide the reader with valuable information about their synthesis and pharmacology as well. Twenty-eight illustrations depict Lewis & Clark’s journey and medicinal practice during this period in American history, and as an added bonus, sections of the Edinburgh New Dispensatory (1806) and The American Revolution Dispensatory (1776) are included in this treatise.

Dickison, a.k.a. the French voyager Pierre Roi, will also share with readers some personal tales about his own trip up the Missouri River as a participant in the 2003-2006 Lewis & Clark bicentennial celebration.