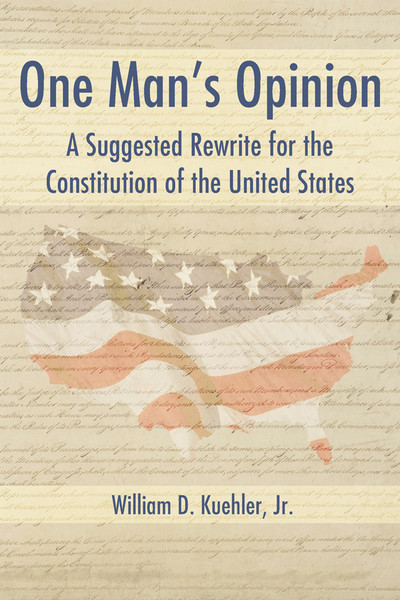 One Man's Opinion: A Suggested Rewrite for the Constitution of the United States
by William Kuehler, Jr.

If you could change one thing about the United States and our government, what might you consider? William D. Kuehler, Jr. has a profound respect for the American Constitution of 1787, which gave rise for the worlds first great democracy. It has successfully served our nation for over two hundred years, providing for our people and fending off external threats. Yet, our Constitution has proven perishable over time. Even with amendments, it has become apparent that much was not included, such as a provision mandating a balanced federal budget.

In humble recognition to those who have made the ultimate sacrifice in defending our way of life, William D. Kuehler, Jr. puts forth a new constitution, which corrects the inadequacies of the original and forces the government to behave in a more logical way. Through One Mans Opinion: A Suggested Rewrite for the Constitution of the United States, Kuehler seeks to overhaul our constitutional foundation to make it stronger, so that we, as a nation, shall continue moving upward toward a bright future.

A native of Ridley Park, Pennsylvania, William David Kuehler, Jr. has lived in Centerville, Maryland for the past twenty years. Kuehler earned a bachelors degree in Aerospace Engineering from Northrop Institute of Technology in 1969 and a masters degree in Engineering Science for Pennsylvania State University in 1980. After a thirty-four-year career as a Mechanical Design Engineer, Kuehler retired in 2006 from the Northrop Grumman Company. In his spare time, he enjoys gardening, fishing, golfing, model boat building, and model trains.

One Gambler's Road to Recovery - eBook