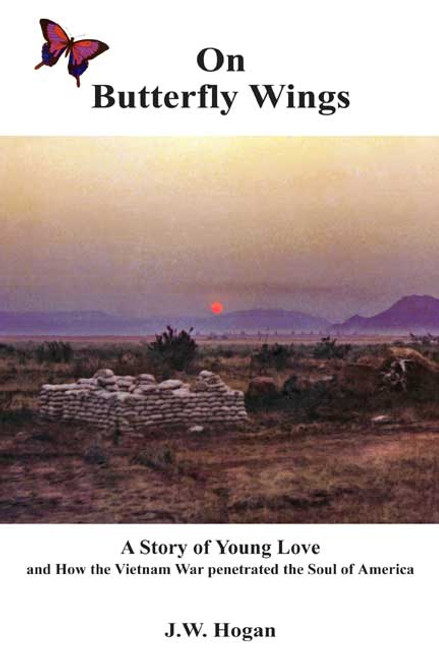 by J.W. Hogan The soldier, above all other people, prays for peace, for he must suffer and bear the deepest wounds and scars. - General Douglas MacArthur The War in Vietnam was one of the most significant periods in U.S. history. We were a country divided between those who fought for the war and those who fought against it. On Butterfly Wings is the remarkable story of Jeff Horton, who leaves his youthful innocence behind to serve his country in a war no one understands. He and his high school friends face a draft into military service to fuel the needs of the war as they all go their separate ways into different branches of service. The story unfolds during the years of 1968 and 1969 as he experiences a new life in the Air Force ultimately taking him to Phan Rang Air Base in South Vietnam. His life is changed forever as he experiences both the horrors of war and the extraordinary friendships that helped him survive it. Unfortunately, his sacrifice requires leaving his dearly loved Katie and his home back in Alabama. On Butterfly Wings is a genuinely moving and honest story. Like a poet, J.W. Hogan captures in vivid detail the sights, smells and sounds, music, and politics of the late sixties, yet he tells his tale in an easy conversational manner. This is an incredible narrative to which children of the sixties can relate and from which their children can learn. ABOUT THE AUTHOR J.W. Hogan is a Vietnam veteran and wrote On Butterfly Wings as a novel based on his own experiences. After leaving the Air Force, he returned home and enrolled at the University of Alabama in Tuscaloosa, where he earned a Bachelor of Arts Degree in History. He loves to write and speak about the South, especially his beloved home state of Alabama. He has spent the last three decades working for the US Postal Service and is the Postmaster in Eva, Alabama. He resides in Hartselle with his wife of thirty-six years, Karen, and is the father of four children. After retirement he plans to continue writing and speaking and will try to help Americans understand how the Vietnam War scarred our nation. He has become a passionate historian of the sixties, especially as it relates to the Deep South. (2006, paperback, 184 pages)
×

For Love and War

Butterfly Wings and Other Things