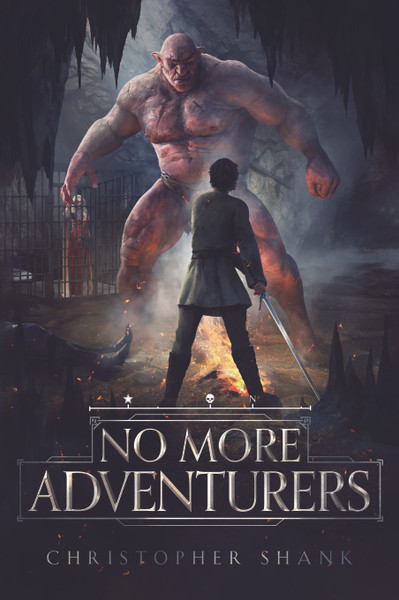 If you've played a video game, you're probably familiar with the heroic journey undertaken by the main cast of characters—the quests, the fights with epic monsters, the loot. That's all well and good, but have you ever stopped to think about what life is like for the little guy—the shopkeeper who equips your character or the farmer whose lot in life amounts to little more than a part of the scenery?

Life isn't very easy for Eric. When there are no crops to sow or harvest, this young farmhand ekes out a living as his village's handyman and spends his days repairing the damage that inevitably follows in the wake of the adventurers who blow through the village. One day, after watching his mayor hand yet another adventurer the village's savings, Eric begins to wonder—why must the village depend on sociopaths with swords to keep them safe? Why do the adventurers act so strange? Why is the mayor's daughter kidnapped by trolls every other day? Questions beget more questions, and before he knows it, this young, simple farmhand finds himself deep in a conspiracy that threatens to shake the very fabric of his reality.

No character in No More Adventurers realizes they're inside of a video game. As this story takes place from the point of view of an NPC, effects players easily recognize as mundane video game happenings are mysterious and puzzling, if not terrifying, for the poor characters.

As a young kid, Christopher Shank would stay up way past his bedtime to watch his dad play Neverwinter Nights and Baulder's Gate on his old Windows 98. Shank was always fascinated with the concept that, no matter how life treated you in the real world, with a few clicks, you could dive into a realm on the brink of destruction and singlehandedly save the world. In 2011, he became a United States Marine and was overjoyed to learn that while Marines are tough and dedicated to discipline, a good number of them were as nerdy as he was! In 2020, he returned home to Clarksville, Tennessee to be closer to his family and work at the family business, Shank Shelter Insurance, and the family nonprofit, BizVets CONNECT. He’s recently become a Big Brother in Big Brothers Big Sisters, he’s a Rotarian, and soon to become a Mason

Even on his worst days, he could easily slip between the pages of a good book and lose himself. To him, there's something magical about literally creating an entire world—fantastical places with their own histories and even people out of your own imagination, and then sharing that world with others. Shank shares these worlds with as many people as possible so, one day, a child having a rough day might find solace in his worlds.