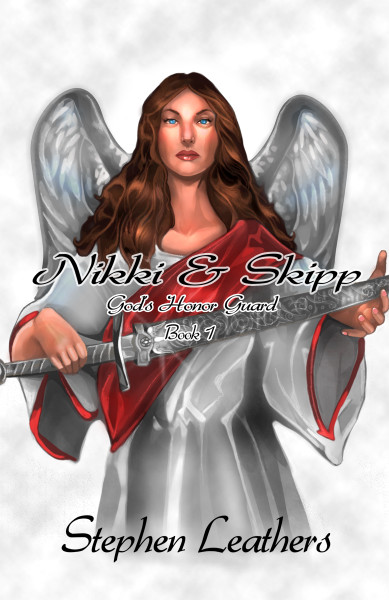 Ten-year-old Nikki is pretty special. She excels in school, has a loving family, and is a dynamic musician. But theres more to Nikki than meets the eye. In Nikki & Skipp: Gods Honor Guard, the first book in a series of five, Nikki witnesses the death of her grandmother. . . or does she? Just when she thinks her grandmother is gone, Nikki sees Jesus bring her back to life. The story doesnt stop here though. Jesus turns to Nikki and tells her that she, too, can heal, cast out demons, and revive the dead. Readers of Nikki & Skipp are guaranteed adventure and miracles as they follow Nikki and her pet dog, Skipp, in everyday life, a kidnapping through Canada, and on vacation to California. In Nikki & Skipp, Stephen Leathers reminds us that all it takes is a little faith to fight a lot of evil.

About the Author: Originally from Iowa, Stephen Leathers lives in Phoenix, Arizona with his wife of thirty-three years. Many of the events that inspired Nikki & Skipp: Gods Honor Guard happened to either him or his wife. The characters are inspired by his granddaughter and pet dog of the same name. In Leathers words, The book is fiction, but the miracles are real. Leathers was educated as a mathematician and physicist. He became a homebuilder after college and owned and managed twenty businesses over the course of his career. Like Nikki, Leathers is a musician, having played the keyboard, bass guitar, and trombone in high school and college. Leathers is also a Christian songwriter and praise and worship leader. He has been retired for five years.