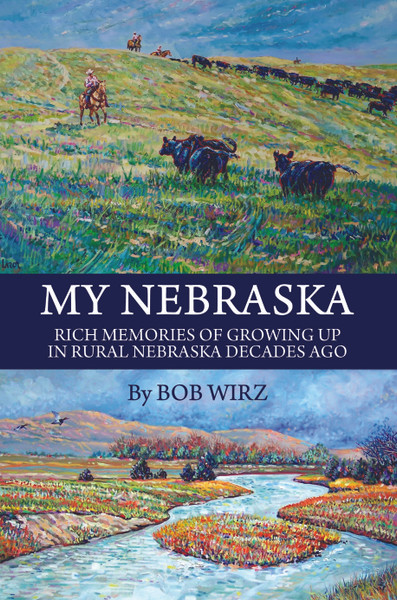 My Nebraska is intended to romanticize growing up in rural Nebraska by someone who has not lived in the state for about six decades. It will bring back tender memories for anyone who lives in, has lived in or knows someone who has grown up in the state. Nebraska can be overlooked by many in this country, and this book will bring to life the wholesome lifestyle of this area. It may also hit home for other people from rural, small-town settings whose home has been in other states. I hope the book will bring unique perspective and re-kindle a great many memories for people of most any age.

generations raised in small towns throughout the Midwest.”

“As a fellow midwesterner (Iowa), I know how much my roots, family and community

mean to me. No one bleeds Nebraska like my mentor and friend Bob Wirz, and he certainly knows how to tell a compelling story.”

baseball man and a deeply-rooted Nebraskan as well as a solid wordsmith.”

“I visit the Sandhills often and each time I drive thru Halsey I reflect to my times spent with Bob Wirz, who once was a resident of this tiny town. Bob is a longtime friend of mine through baseball who has a great passion for our state. I especially enjoy our mutual appreciation of the Sandhills' beauty and uniqueness.”

A NATIVE NEBRASKAN raised in the Sandhills village of Halsey, Bob Wirz has been a media specialist in the world of sports for about 60 years, with heavy concentration on professional baseball. Wirz is a graduate of the University of Nebraska, a proud supporter of the school's Department of Mass Communications, and an avid follower of anything in Husker Nation as well as his native state. Bob’s early work experience included six years as publicity director for the Kansas City Royals, and a background in newspaper, radio and television work. One of Wirz’s more intriguing tasks was running Major League Baseball’s media office and serving as chief spokesman for Commissioners Bowie Kuhn and Peter Ueberroth from 1974 to 1985. His duties included coordinating media activities for the annual All-Star Game and World Series. He has run Wirz & Associates, a sports public relations and consulting company, since 1985. He also wrote a column, the Independent Baseball Insider, for a dozen years. Bob published his first book, "The Passion of Baseball", which covers much of his experience in the sport as well as his business life, in 2016. Bob was proudly inducted into the Nebraska Baseball Hall of Fame a short time later. He and his wife Maybeth reside in Stratford, CT. They have four children and five grandchildren.