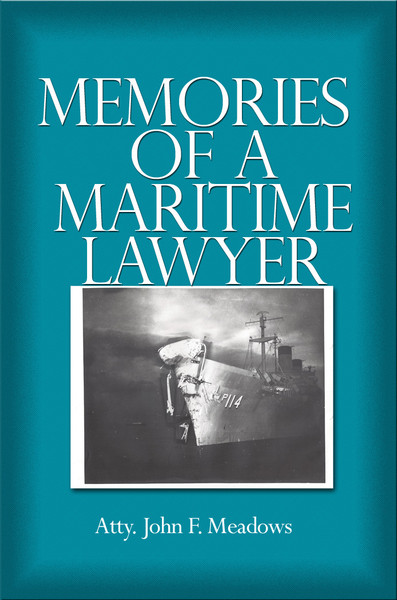 Memories of a Maritime Lawyer is the first nonfiction collection of contemporary maritime stories, not only written by a maritime attorney and packed with invaluable practical legal information (with references) for law students and fellow practitioners in many related fields (such as Coast Guard investigations and marine insurance), but also written for the general public who crave seagoing adventures.

Atty. John F. Meadows was born and raised in the Philippines. His parents were English and American, the former all seafarers, the latter a soldier who took his Army discharge in the Philippine islands.

John attended Boalt Hall Law School in Berkeley, was commissioned as a 2nd LT Interpreter/Translator after attending Army Japanese Language School, served in the Department of Justice for several years and then in various law firms, one being a firm he founded. Unfortunately he contracted Parkinson's disease, which ended his law career. He was then able to spend time in Paris and paint and draw.

John has two children. Both are in the maritime industry; his son is a ship's agent for an oil company and his daughter is a marine insurance underwriter.