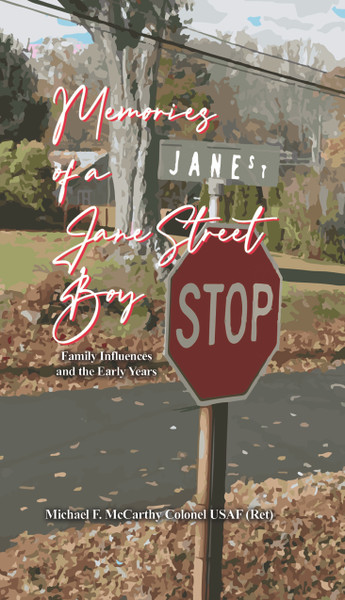 Memories of a Jane Street Boy

Memories of a Jane Street Boy is the fictionalized version of the impact one family and special group of friends have had on the life of Michael McCarthy from his early childhood all the way through high school, their impressions and lessons having a lifetime effect. Predominately focused between the years of 1951 and 1969, Michael’s tale is one of friendships’ rites of passage, adventures and misadventures, successes and failures, love lost and love found, which transcends any era. Any person of any age can find commonality with his story of growing up and learning lessons and causing mischief along the way.

Michael F. McCarthy Colonel USAF (Ret) was born in South Dakota in June 1951. His family then moved to Wisconsin, where he lived until he was five. They then relocated back to his mother’s hometown in New England and attended a Catholic grammar school and then a four-year college preparatory school. At age thirteen, he began working at a florist’s and then, at sixteen, for a non-union trucking company. He later earned his BS in mathematics and, in 1973, entered the United States Air Force, receiving his Commission in December 1973. He spent the next thirty-plus years as a USAF officer, first as a crewmember, then as an instructor and flight commander in the Air Training Command and in Headquarters ATC and in the Pentagon. In 1994 he achieved the rank of full colonel, and in 2004 he retired from the USAF. For the next eleven years, he worked as a defense contractor supporting training programs within the intelligence community.

McCarthy retired for the final time in October 2014. He now resides in northern Virginia with El Hierro, his big German shepherd, several miles from his son, daughter-in-law, and two grandsons.