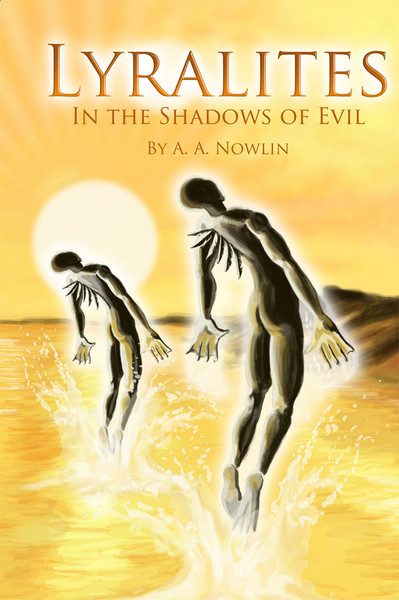 LYRALITES
by A. A. Nowlin

A. A. Nowlin's LYRALITES: In the Shadows of Evil is a flight of fantasy to a world of unknownsa world where the two groups of inhabitants--the Lyralites and the Levors--live as mortal enemies and continue the age old saga of 'good versus evil.' While quite similar in appearance, the Lyralites are an amphibious group of cave dwellers living in the waters of Talia; and the Levors cannot exist in the ocean, but live on the land and can fly through the air. This struggle all takes place on a mysterious planet called Dasara, which can only be imagined in the evening sky from Earth.

In the year 2025, a group of travelers in a resupply spaceship from Earth are diverted to Dasara where the ship crash lands after a collision with an asteroid. Strange things begin to happen, as the Earth crew learns the secrets of Dasara and the real reason for their 'accidental' landing on this planet.

This fantasy presents a fascinating parallel between the storyline and the reality of life, leaving the readers to draw their own conclusions.

A. A. Nowlin was born in Africa to Portuguese parents and immigrated to America in the 1960s, where she lived in Connecticut until her graduation from Cathedral Girls High School. She spent several years on the glorious tropical islands of Hawaii, before moving to Florida where she raised two wonderful sons and met her soul mate, a US Naval veteran.In addition to writing, her interests include cooking, especially traditional Portuguese dishes; and gardening, where she can enjoy the beautiful creations with which God has blessed us.