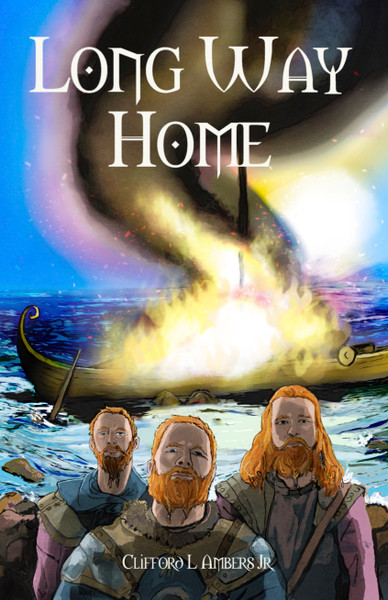 After about 35 days travel, the 20 Norsemen landed their long boat on the rocky shore. They had found the fabled land west of their normal travels. They found good timber and started loading their boat with it. A local tribe raided their camp, when 10 of them were gone, the 10 in camp were killed, boat and weapons burned. The 10 who were alive had no weapons or boat, they were stranded.

They thought there only chance of getting home would be to travel west and go around the round world. They traveled all the way to the big water to the west, where they were found almost starved to death. They were saved by a local tribe. Their problems traveling, and obtaining food and other obstacles are overcome.  A little known legend that needed to be told. It could have happened like this.

Clifford L Ambers Jr. worked for a major timber company for thirty-eight years and spent eight years in the army and reserves. Ambers also volunteered for the Klamath County Museum advisory board for eight years. He has owned and operated a cattle ranch and timber land and has always been interested in history.

The Demon and The Angel - eBook

Golf Consistency, Exorcising the “demons” in your Way

Golf Consistency, Exorcising the “demons” in your Way - eBook