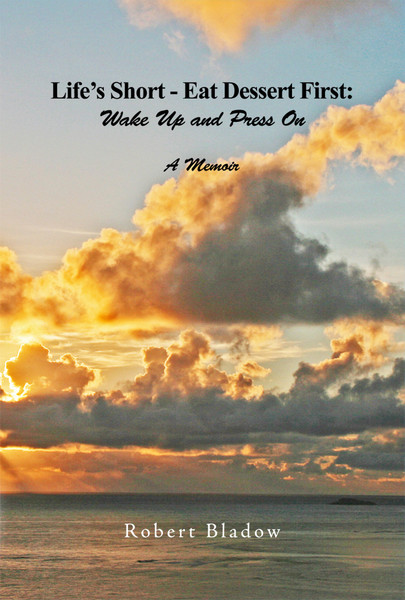 Life Is Short – Eat Dessert First is more than author Robert L. Bladow’s story. From his family research, he learned that his grandfather had a story to tell but left it for him to discover. His life was full of challenges and perils that took every bit of determination for him to survive. How he survived is a lesson of determination and perseverance.

His son, Robert’s father, who persisted through the Great Depression and with his career, is the example he set that had exposed Robert to many practical life skills and the experience of acting in theatre, which later allowed him to be successful at what he chose to do. Robert’s older brother, Terry, had a significant influence on him by sharing his wisdom and skills while they were growing up.

Life is a challenge that can be met with determination and perseverance to gain a successful life, and if Robert’s experience helps just one person deal with that, he would be satisfied. He hopes his readers enjoy the story and have a reflection that is meaningful to them.

Born near the end of the depression, Mr. Bladow grew up in the Great Lakes area and the Midwest during the hard times of WWII and the Korean War. As a child, age ten to fourteen, he had experience at acting in university theatre. He is a Viet Nam Era Army veteran, a member of the American Legion, and a member of the Chatsworth (California) Fine Arts Council.

Mr. Bladow is retired from a career in information technology that spanned forty-eight years in the banking, finance, and insurance industries in California. From the very beginning of computers and information technology, he was a pioneer. He began with programming on mainframe computers, doing automated check processing and bank accounting. He developed processes in document imaging, automatic teller machines, online bank teller automation, and later on to such things as preventing the Year 2000 glitches in computers. So much has passed since then that one’s thoughts about how we got to our E-media world of today are left to the historian’s world.

He describes himself in this way: “I am left-handed and nearsighted, had five siblings, and grew up to survive that way. I am a technical and practical male with a hobby of photography and got married at thirty-one, happy to avoid being a confirmed old bachelor, fathered three boys, all of whom grew up and joined the Air Force as their chosen direction in life. My wife, Celia, and I are best friends and have been for more than fifty years.”