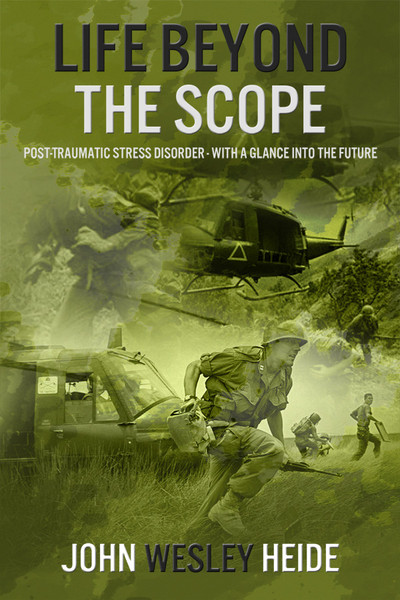 Life Beyond the Scope: Post-Traumatic Stress Disorder - With a Glance into the Future
by John Heide

John was sure of himself. So sure that as a small-town teenager from Arizona, fresh out of high school, he wanted nothing more than to be among the elite who call themselves the Marines.

Eager to serve his country, he walks into the local recruiting station, a young boy with idealistic and quixotic military dreams. But his indoctrination into the separate world of non-civilian life would prove daunting and confusing, bringing him to a new reality. Hes forced into manhood before his time, transforming quickly into a hardened Marine intent on survival.

In Life Beyond the Scope, author John Wesley Heide shares a gripping tale of war and all its ugliness, of expectations shattered and of a homeland that becomes foreign soil to this Vietnam veteran. Will he break? Will the pressures both at home and abroad combined with the harsh realities of war prove too much to bear? Or will he be among the few lucky ones, the war-weary veterans who physically make it out alive yet try painstakingly to come to terms with the post-traumatic stress disorder that consumes their daily life?

We travel along with John for the journey -- from boot camp to combat to the ultimate scars war leaves behind. And ultimately, through the critical lens of a veteran, we glance into the future.

John Wesley Heide is a Vietnam veteran, having served four years active duty in the U.S. Marine Corps as a demolition/ammunition technician. He earned a bachelors degree in political science from Arizona State University and is a certified genealogist. He is involved in numerous volunteer organizations, including nearly thirty years in the Marine Corps Toys for Tots program. He has five adult children and lives in Texas with his wife, Carol.

Life Embraces: A Collection of Poems

Life As Seen Through the Eyes of Lyle Hatcher

Life is a Mission

Life in the Great Outdoors