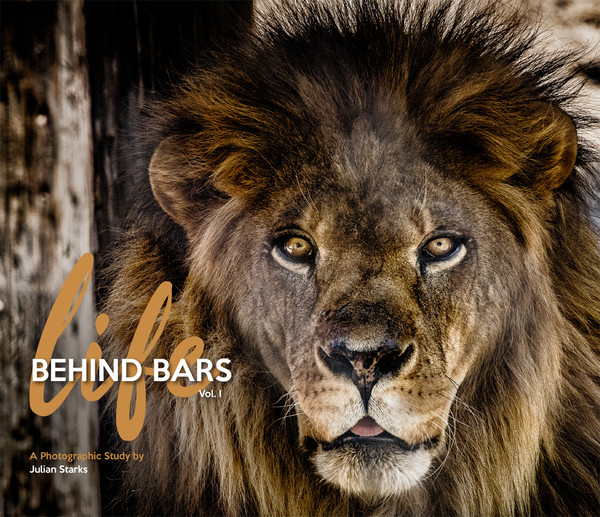 The most comprehensive photographic study to date of animals in captivity, Life Behind Bars, examines exotic and endangered animals and the necessity of their captivity for their own protection, and that of their species. It is a very real risk of many species becoming extinct in the shockingly near future is highlighted in short, informative texts. Julian Starks has travelled all over the United States to institutions ad sanctuaries to document these stunning creatures that are no longer threatened but living full, happy lives.

Julian Starks started his non-profit, Visions of the World, with the mission to raise awareness, change perceptions, educate, and support those who need representation. While creating this book, it was an important goal for Starks to support the wild animal sanctuaries and institutions that protect and preserve endangered species. A portion of the proceeds of Life Behind Bars book sales and associated merchandise will go directly to these institutions.

"A coffee table book, exhibiting superlative photography; glossily hard-covered and glossy throughout. It is nine inches high, eleven inches wide, about a half-inch thick. Full-page photographs bleed to the edges of pages, lending impact to exhibited plates when the book is open. The binding allows open display.

Of course, emphasis is on confined creatures; though the text does make it clear that some are confined for emergency breeding of imperiled species, some for rescue purposes. The work is dedicated to PETA Business Friends, and each presentation of a species details the current extinction threat it is under. For example, the Chinese alligator is classified as critically endangered. (Full revelation: I never knew there were any alligators outside the Americas!) polar bears and African lions are tagged as vulnerable. Meerkats, prolific and vigilant little critters, rate under “least concern,” as do Japanese macaques, flamingoes, and, happily, grey wolves. The book obviously intends to Increase sensitivity to the plight of constrained beings.

And that intent is accomplished repeatedly and masterfully. Most telling are the shots that show us other intelligences in captivity, enduring constrained existences. Many elicit pity: a grey wolf striding, golden eyes observing, but with the shadows of chain link dappling its fur; an adult, lactating gorilla with her young one, seated in obvious boredom; a chimpanzee, our closest relative, staring soulfully through more chain-link fencing.

Returning to the photography itself, I must praise the texture, color/contrast, and immediacy of this presentation. As stated, full plates bleed to page edges, and where smaller illustrations occur they are most often bordered in black. This has some exceptions: giraffe faces are quite fittingly shown against the sky. The volume overall is a dark presentation.

This leads me to some negative technical observation necessary to mention in an honest review. The text is all too often a tiny white font on black. It’s obvious that its purpose was to avoid competition with the photo art, but It is difficult to make out what is written at the distance demanded by the photos, and, because of the glossiness of the pages, is very difficult to read under a reading lamp even with a lens. Where text is black on white it is, whilst similarly minuscule, much easier to read. This is the first of multiple volumes. Some editing would be helpful in future commentary/text. On pages 14 and 15 are wonderful pictures of African lionesses against a rock, but the accompanying text conflates African lions, which are of the genus Panthera, with American mountain lions, which are large cats descended from (Pleistocene?) small cats. That is why cougars retain the hyoid structure for sustained purring.

All negatives are trivial in this magnificent work of photographic art."  Reviewed By: David Lloyd Sutton

"In Life Behind Bars Vol. 1, author, photographer, and first-time documentary filmmaker Julian Starks takes readers on an unforgettable journey through the wild to explore the dangers that lurk for some of the most magnificent creatures on earth. Through countless photographs and thoughtful words, he allows readers a rare glimpse into what makes surviving in the wild a sometimes impossible task. He views sanctuaries as “a necessary evil” in order to preserve the few that remain of the vulnerable, threatened, and endangered species. In captivity, they can be protected from poachers who want their extravagant pelts to sell, their bones to use in traditional Asian medicine, and their sacred tusks for ivory. They can also be shielded from unmitigated abuse and suffering. Habitat loss due to deforestation, increased human populations and settlement, and the devastating effects of climate change pose further danger to the livelihood of a startling number of wildlife. Gorillas, for example, he writes, have decreased in population over the last three generations, each one spanning 22 years, by an unsettling 80%, landing them in the critically endangered category. It’s thought that approximately 180 or fewer Marcgrave capuchin monkeys remain in the wild, posing a significant threat to the survival of their kind. Even the African lion population, according to Starks, has decreased over the past 21 years by 43%, causing them to be considered among the vulnerable population. A considerable amount of research is laced through the pages of the text to support his plea that all “must love and keep safe all the beautiful creatures in this world,” even if that means holding them behind the walls of captivity for the betterment of their species.

This is the first of Stark’s fine art photographic studies and is masterfully written. It’s crafted with distinct originality. The photographs included capture animals in unique form: two cheetahs running with eight paws off the ground simultaneously, a male and female lion intimately standing together under a brilliant sunset, a gorilla elevating her middle finger to showcase her displeasure with being photographed, and a gorgeous giraffe gently resting its chin on the neck of another.

The vast area of coverage, from North and South America to Asia and the arctic regions of the earth, is impressive. The extensive travel and well-documented research that went into the makings of this amazing volume are unquestionable. The value and overall quality of the book is elevated considerably as a result. Further, the classification system used throughout to assign risk levels to those featured is helpful in outlining the data. It also makes the information more comprehensible to the layman. Though Life Behind Bars Vol. 1 is targeted to an adult audience; however, older children, teens, and young adults will find it both fascinating and thought-provoking. Its scope and presentation will appeal to multiple generations. Additionally, it’s an ideal text, with its gorgeous photographs and enticing cover, for a coffee table centerpiece. It’s likely to become a conversation starter and a family treasure."  Reviewed By: Jennifer Padgett

Life Behind the Mask - eBook

Life Behind the Mask