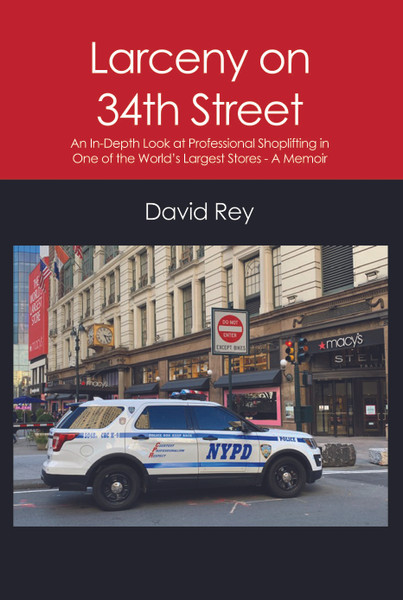 Larceny on 34th Street: An In-Depth Look at Professional Shoplifting in One of the World's Largest Stores – A Memoir

What is Organized Retail Crime? What are professional shoplifters? Do people really pay their bills and raise their families using the proceeds they earn from shoplifting? What causes someone to choose shoplifting as a profession? Answers to these questions and more make for a compelling memoir, a story that is yet to be told. Professional Shoplifting by members of Organized Retail Crime is a craft, from using their own children and/or recruiting children on the street to their clever use of burglary tools which helps them facilitate these thefts, this is a rare kind of memoir. It is the author’s hope that Larceny on 34th Street: An In-Depth Look at Professional Shoplifting – A Memoir serves as any introductory piece that puts Organized Retail Crime in the public spotlight.

David Rey is a graduate of the University of Tampa with a Bachelor of Science in Criminology and has spent seventeen years overseeing the security operations at several internationally renowned flagship retail locations in NewYork City, including Tiffany & Co., Louis Vuitton, Bloomingdale’s, and Brooks Brothers. It is however, from his tenure at Macy’s Herald Square, that he has decided to chronicle his experiences in a memoir. By running the security operations in “One of the World’s Largest Stores,” Rey has experienced a realm of Professional Shoplifting and Organized Crime, most of which the general public knows little about.

Are You A “Jay”, When Crossing The Street? - eBook