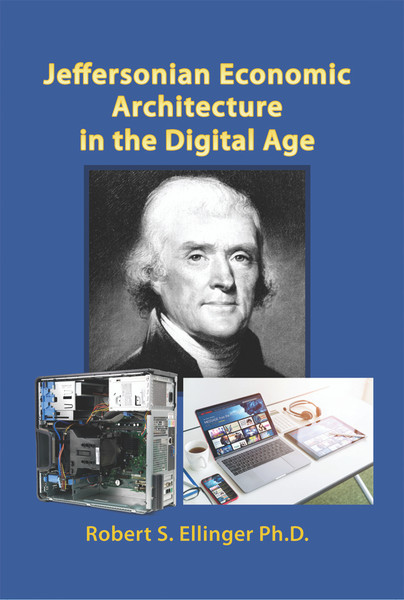 Jeffersonian Economic Architecture in the Digital Age is a book focused on how to synergically adapt to the catastrophic change in culture that humanity is currently undergoing. This is due to seismic change in technology at the dawn of the Digital Age. The author Robert S. Ellinger Ph.D. has created an architectural model using concepts from a variety of academic disciplines including spatial economics, history, systems engineering, information technology, enterprise architecture, and political science. He uses this model to demonstrate how humanity adapted to technology change in the past. He then transforms this model for the future Digital Age. And he does this while keeping Jefferson’s and other founding father’s concept of equal opportunity for all as envisioned in the US Declaration of Independence and Preamble of the US Constitution.

Robert S. Ellinger Ph.D. earned his doctorate in spatial economics from the University of Iowa in 1978. He then taught computing and systems analysis as an assistant professor in business and information systems. He then worked as a project manager/data networking lead in the office furniture industry where he led a project that won a manufacturing industry lead award. Following this Dr. Ellinger was employed by a major defense contractor as an information specialist and the lab manager of an advanced data networking and automation laboratory. He won several awards from his employer including being named a Technical Fellow.   He progressed to National Lead Systems Engineer (internal) then to Chief Software Architect. He then moved to another defense contractor and became Chief Process Architect. He participated in many national and international standards committees and was the recipient of several awards from defense industry associations.

Dr. Ellinger is now retired and enjoys cruising on his sailboat.