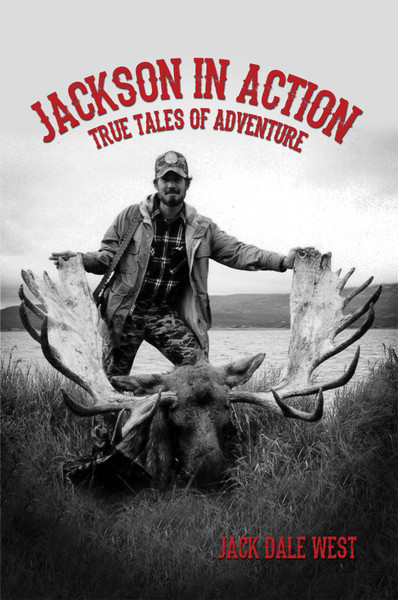 Across the world from Africa to Canada and down to the backwaters of Florida, Jackson in Action: True Tales of Adventure is just that; an entertaining, informative, and humorous account of the authors hunting and fishing successes, secrets, and lessons learned. This compilation of short stories recounts the pastimes of fishing and hunting with friends and family, record-book catches and hunts, and, of course, the ones that got away.

West invites the outdoorsman to come along with him on numerous hunting and fishing tales that are guaranteed to keep you captivated. From bow to black powder and from reel to spear he will take you on adventures that most people never get to experience. Spanning sixty years of his unleashed life, he has handpicked unique explorations that are sure to keep you in the action. From tales of his first squirrel hunt with his grandfather in Ohio to his cast netting endeavors in Florida where he lifeguarded during his junior college years, West reels his readers in with his larger-than-life anecdotes as he takes them along to his best fishing spots and hunting lookouts across the country.

Jack Dale West was born in Zanesville, Ohio. When he was three years old, his parents moved to St. Petersburg, Florida, where his father was to have a thriving Chiropractic Office. West grew up in St. Petersburg in the early fifties and sixties. When he was introduced to hunting and fishing around eleven years of age, he was hooked for life. When he wasnt in school, studying, or doing chores, he would be on the water or in the woods.

When he completed his studies at St. Petersburg Jr. College, he followed in both of his grandparents and his fathers footsteps. He moved to Indianapolis, Indiana to attend Lincoln Chiropractic College. He earned his diploma and was licensed to practice Chiropractic Medicine in St. Petersburg, Florida in 1970. West set up his practice and treated thousands of patients for twenty-four years in St. Petersburg.

Following a lifelong dream to live in Montana, he moved from St. Pete in 1994. With him he brought his wife, his stepdaughter, and his companion, fourteen-year-old Montana, a black Labrador Retriever.

Today he lives in a small town in northwest Montana and continues his chiropractic practice. In his spare time you may find him working on his ten-acre ranchette, spending time with his grandchildren or out exploring the vast wilderness scouting for new adventures.

Dr. West has lived much of his life with a famous quote in mind: Life is a daring adventure or nothing. (Helen Keller)

Was Michael Jackson Murdered? You Be the Judge - eBook