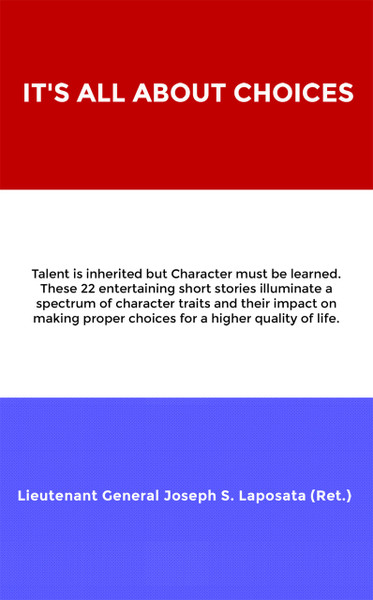 It's All About Choices
by Lieutenant General (Retired) Joseph S. Laposata

The bottom line of this book advises that talent is inherited but character must be learned. Its all about the choices we make in developing our character that embellish the gift of talent, permitting us to make a positive difference in the quality of our lives. We all know smart people who wont focus, fail to apply themselves to productive endeavors and make choices that interrupt their lives and the lives of those close to them. Men and women of average talent but with an undeniable strength of character often outpace these smart people who are muddling through life making one bad choice after another. The stories in this book will assure you that blending talent and character is not as difficult as one might imagine. It takes a mix of persistence and determination, knowledge and wisdom and patience and compassion. Take choices seriously and change is right around the corner.

About the Author: Lieutenant General Joseph S. Laposata (Retired) was born in Johnstown, PA. He worked daily with his father in the familys barber shop from age ten until he went to college. He had a barbers license at age 16, played accordion in a polka band and paid every penny of his college tuition. His BS degree in Biology was from Indiana University of Pennsylvania where he was a Distinguished Military Graduate in ROTC. In 1968 he received an MS degree from Cornell University in Agricultural Economics. He was commissioned a 2nd Lieutenant in the Army in May 1960 and retired in 1993 with the rank of Lieutenant General. Later he served in the Federal government as the Secretary of the American Battle Monuments Commission and as a NATO diplomat at NATOs Maintenance and Supply Agency in Luxembourg. Joe and his wife Anita have three sons, three daughters-in-law and seven grandchildren. They live happily in Viera, Florida.