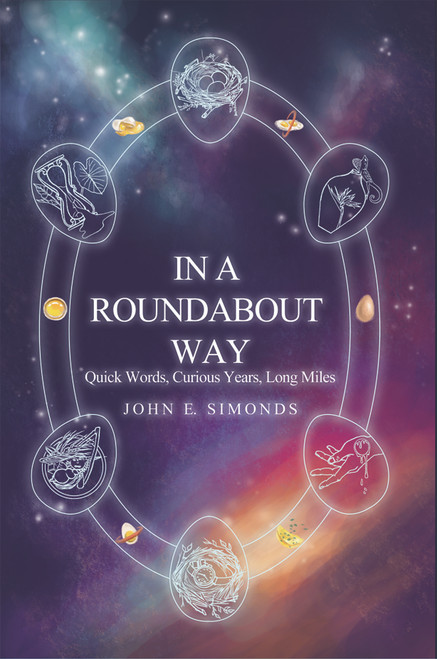 In a Roundabout Way is a collection of eclectic, mood-shifting poetry that speaks to audiences of varied interests. Some poems revisit career experiences in narrative detail. Others comment in shorter form on recent topics. Some focus on family, illness, and personal insights. Still others observe people and events knowledgeably from a distance. In exploring pieces ranging from light and breezy to sardonic and impatient, each reader hopefully may find lines and points that resonate.

John E. Simonds is a retired former Honolulu daily newspaper editor. Born in Boston during the Depression, he grew up in New York’s suburban Nyack during World War II and the Cold War. He graduated from Bowdoin in 1957, majoring in English, and quickly joined a small newspaper in Indiana. He found that journalism fit his hopes of finding work with daily writing and possible adventure. He served in the US Army as a reserve lieutenant with active duty for armor officer training in 1958.

He went on to work for newspapers in Ohio, Rhode Island, and Washington, DC, including as a correspondent for the Gannett News Service and its expanding group of papers from 1966 to late 1975 when he was transferred to

Hawai’i as managing editor of the Honolulu Star-Bulletin. It was the first of several titles in 27 years with Hawai’i newspapers, through various regime changes, before retiring in 2002 as ombudsman for The Honolulu Advertiser. In Washington during the historic ‘60s he met and married his wife of 52 years, Rose “Kitty” Simonds. Together they have children, grandchildren, and other family on the mainland and in Hawai’i. His other interests include sports, politics, long-distance jog-walking, freelancing, poetry, writers’ conferences, and grandparenting.

Drawings for the Curious Observer - eBook

The Nature of Mars - eBook