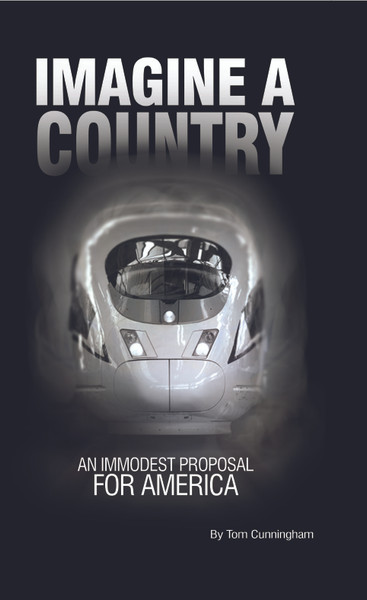 Imagine a Country: An Immodest Proposal for America
by Tom Cunningham

Imagine a country with a high-speed passenger rail system better than any on earth. imagine a country that has found a way to almost eliminate two of the biggest producers
of carbon in history: coal/oil/gas fueled electrical generators and gas fueled cars and trucks.

Imagine a country that creates hundreds of thousands of jobs to build this infrastructure project, even more jobs to service the system, and more still to operate the numerous
factories in the federal industrial parks, in part with a subsidy program to recruit and retrain the working poor in the major cities. Imagine a country which can finance the cost of the infrastructure project with private capital.

Imagine a country where justice can be found in the courts quickly and efficiently; where the loser pays legal fees; and where prosecutors cannot with impunity use the
courts as their personal piggy bank or to advance their political careers.

Imagine a country with an educational system based on Internet virtual learning techniques; where disciplinary cases are isolated from the general population; where students are constructively engaged in school work and physical activity from 8 a.m. to 5 p.m. under adult supervision; where children are assured of two meals a day and a full calendar school year mirroring their parent’s employment situation.

If you can imagine all of this and more, then you need to read this book to learn how to make it happen. And if you are a Congressman or Congresswoman and will be voting on proposed infrastructure projects, this book is a must read. The author believes that no one has proposed a reform plan of this magnitude and depth and with as many novel ideas and sensible approaches. Moreover, no one has ever proposed such a massive effort with no long term cost to the federal government.

This book will certainly enable the reader to imagine a better America, creatively architected for the future by Tom Cunningham. This book is jam packed with fresh, specific and detailed proposals that will improve our country for our progeny. But don’t be fooled; the author’s ideas are hardly immodest. Read this book. You will learn a lot. Cunningham’s hard hitting suggestions may make you flinch a bit but you will surely imagine a country different and preferable to what we presently have. His proposals are inspiring, pragmatic, affordable and full of hope for future generations. Don’t be surprised if you catch yourself wistfully smiling as you think about what kind of country our grandchildren and children can live and thrive in, if we were only to implement Cunningham’s thought-provoking and stirring ideas. This is a scholarly read, written by a bright and compassionate author, who covers a great deal of ground in this short book. Once you read it, it is likely that you too will jump on Cunningham’s MAGLEV train.
Paul Bloom

About the Author
The author graduated from Canisius College in Buffalo, N.Y. summa cum laude. He also completed the coursework for a Masters in English Literature while teaching at St. Bonaventure University. He has a Masters in Business Administration and a Doctorate of Law, both from Cornell University. After starting to practice law in a small Wall Street firm, he completed a Masters in Federal Tax Law at NYU. He then became a partner in the international law firm of Morgan Lewis and Bockius in their New York office, where he developed a large transactional practice, mostly in tax-induced financing.

He subsequently left his law practice to work as a residential real estate developer and builder in the Hudson Valley. Thereafter he developed a multi-faceted legal practice as a sole practitioner. He now manages a shopping center and a thoroughbred horse farm.

Processing the Process: The Diamond that Did Well Under Pressure! I'm Still Standing...

From the Hood to the Heights

The Longevity Pill and Furnigore

Open the Door to the Truth