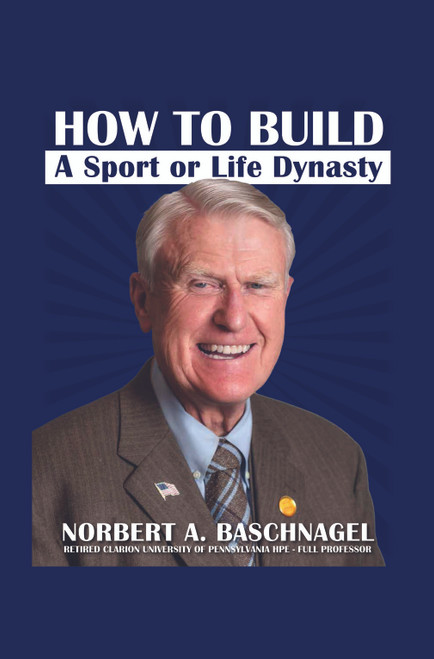 “How to Build a Sport or Life Dynasty is a must read book, not only for those who are currently coaching and those who aspire to coach, but also for people who are seeking to live meaningful and productive lives.”

“Coach Baschnagel gives a very detailed and successful plan on how to excel as a coach and how to create a sports dynasty. This plan is based on his expertise, knowledge, and life experience. It was this plan that enabled him to create a Sports Dynasty for the Women’s Varsity Tennis Team at Clarion University. In his last four years of coaching the team, a record of 57 wins and only 1 loss was compiled. This book can help any coach achieve greater success. In this book Coach Baschnagel is sharing “The tricks of the trade” with his readers.”

“He also shares the qualities that are needed for a person, not only to be successful in life, but also to be significant. If a person wants to have a higher and more satisfying life, this book is a must. As the author has excelled in his personal life, coaching, and in the community, he has brought that same excellence in this book.”

“The book exemplifies how to develop and build a sports or life dynasty and is truly how you live your life. Your persistence, determination when others said it could not be done, commitment, dedication to others and your amazing leadership skills are fundamental in shifting from success to significance.”

“Being a part of your “Tennis Dynasty” for four years and playing under your leadership was both an honor and privilege. At the same time I didn’t realize how valuable the life’s lessons were that I was acquiring. You don’t always see the magnitude of something while in the middle of it. What you write about is exactly what your expectations were of each player. Good sportsmanship, hard work, discipline, teamwork, training, preparation, compassion, self-control, enthusiasm and friendship are all attributes that you valued and instilled in us as our leader. These qualities have carried over into adulthood and are great strengths to have throughout life.”

“Whether you are a coach wanting to build a team dynasty, or an athlete wanting to master his or her skill, this book is a roadmap to do just that.”

“Norb always has a plan, and with that plan he has always had Beverly to make sure he stayed focused to get these plans accomplished. Only Norb could have believed and figured out how to build a dynasty in a place that is known for Wrestling and Autumn Leaf Festival. If you want to know how to build a successful program in sports, business, and even life, read this book, “How to Build a Sport or Life Dynasty”. Everyone thought he was crazy, including his assistant coaches and some of his players who are in the Clarion Sports Hall of Fame, but two years later, we were not only the best tennis team in the PSAC for four straight years, we were the dominant team on the whole east coast. Coach Baschnagel is the only person who could have believed and made this happen, and I believe with hard work and using his principal’s you could be as successful as he was, but you must burn the midnight oil. You can’t be successful by accident, and this success story does not come without a few hard times and headaches. It is a book that you will not be able to put down and you can use every day.”

“In this his fourth sports themed book Norbert Baschnagel tells the story of how he took a struggling, non-winning women’s tennis program at Clarion University of Pennsylvania and turned it into the conference leader with an astounding string of wins during his stint as head coach. The achievement led to many honors including his being named the conference’s “Coach of the Year” and being inducted into the Clarion University Sports Hall of Fame.” Baschnagel then provides a detailed blueprint of how he achieved his success and how others can achieve similar results. Baschnagel eventually left coaching to become a member of the Clarion University faculty, teaching in the university’s Department of Health and Physical Education for many years before retiring recently. A few years before his retirement Professor Baschnagel received one of academia’s highest honors when he was named a full professor. Though Coach/Professor Baschnagel is now retired he is not resting on his laurels as he remains active in the community and the sports world. And as this book ably demonstrates while he may be retired he is still very much in the game.”

Department of Information and Library Science,

Let That Cancer Go: A Guidebook for Leaving Negative Thoughts Behind and Finding Your Joy Again - eBook