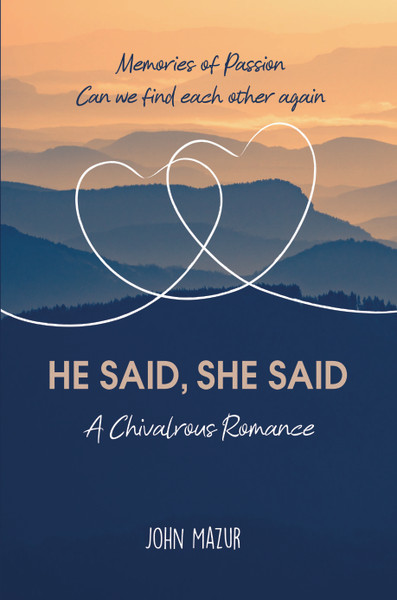 He Said, She Said: A Chivalrous Romance

The cushion of your favorite chair sinks to a comfortable level, and the story begins, alternately told in the voice of Doctor Elaine Emerson and Professor Peter DuBois. He Said, She Said is a chivalrous romance that blossoms out of respect, patience, and understanding, uniquely tied through spiritual forces, intellectual and romantic.

Now an accepted physician at one of San Francisco’s top hospitals, Doctor Elaine has it all; all except for her professor. Enduring dark times, Doctor Elaine and Professor Dubois encourage one another to struggle through, for their hook is a wonderful connection many would find hard to believe or comprehend. Their unique tie is perhaps from another world exposed within their souls, then again, who knows? Impossible, you say, yet, in truth, it happens. Scary at first, yet it is a lot of fun. Then gone, but not forever. During their short time of love, Peter does everything to entice Elaine’s desire to never forget to return to their high mountain Montana kingdom of love, where she is goddess of all she sees. But Peter is gone now, and Doctor Elaine assumes they are no longer a couple. As she follows some of his successes in the writing world, Elaine conjures vivid memories of their love, wondering how, and why, and what now?

John Mazur graduated from Montana University with a masters in 19th century German theatre and English literature. He was born in Chicago, to a second-generation Polish meat packer and a German mother who played piano in the Chicago Park District. His heart was captured by Montana and the breathtaking beauty and grounded people he met there. Both Montana and Chicago have influenced his writing. His desire to bring back the liberal arts to society, along with its soul-changing influence is evident in his writing. His careers have spanned from teaching at the University level to Principal on the Blackfeet Indian Reservation. He has trained under a master sausage maker from Warsaw, Poland and run two separate sausage plants. For years, his teachers and friends told him to write. He Said, She Said is John’s first published book. His second will follow in 2022. In his writing, he invests time and energy into his characters and the vision of their relationships as the stories unfold for the reader to enjoy.

Memoirs of My Heart: She Said, He Said

A Death at the Potawatomi Club - HB