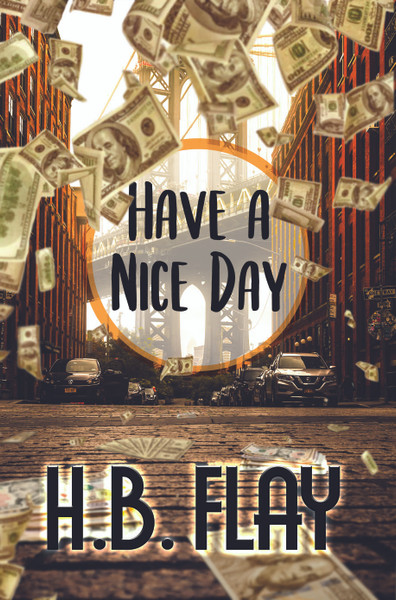 In Have a Nice Day, three New York Telephone Company employees find a briefcase containing 300 (OTB) OFF-TRACK BETTING tickets worth $1,000 each, for a total of three million dollars, which was absentmindedly left behind by a bumbling aid to a Mafia boss. A homeless man finds one of the tickets on the street that one of the Tel Co. guys loses. The homeless man's good fortune becomes fodder for a newspaper reporter's story, since the homeless man wants to use the money the ticket is worth to find his children, whom he hasn't seen in 20 years.

Then the story unfolds—there’s the cemetery worker who reveals the secret WW2 formula that is ingested by the racehorses, enabling them to win their respective races; the handsome Mafia lawyer who falls in love with the beautiful Mafia moll; the trail they follow through the New York Public Library computer's database of missing children; the series of unexplained murders connected to one individual; a tenacious N.Y.P.D. Lieutenant; the three New York Tel. wives; and of course, the poor unsuspecting robber that foolishly decides to mug one of the New York Tel. guys and inadvertently pulls the entire tale together.

H.B. FLAY grew up in a borough of New York City called Queens, in the small town of Far Rockaway, which has a small portion of it called Bayswater. It got its name due to its location on the perimeter of Jamaica Bay, a place where he went fluke and flounder fishing, as well as crabbing for blue claw crabs, first with his father, Harold, and then with his late wife, Patricia, and three sons, Harold, Kevin, and Steven; daughters-in-law, Kim and Emily; and three grandchildren, Kevin Jr., Jason, and Rachel; in many of the boats they owned over the past 80-plus years.

After four years in the Air Force, H. B. went to college on the G.I. Bill. After graduation he held a position at American Bosch Arma Corp. on Long Island, where they built and successfully flew the inertial guided Atlas Missile. After a short stint at Grumman Corp. and the collapse of Aerospace, he was offered a position at New York Tel. to work with other engineers at Bell Labs in New Jersey, to integrate and upgrade New York Tel.'s mechanical central offices with digital equipment. After 20 years with a great team of both management and craftsmen, all the mechanical central offices were successfully upgraded. Computers were introduced to several hundred employees to better manage their daily work scheduling and he retired.

Now You Have It - eBook

The Poemography of Hellen Hagler: Her Story in Poetic Form - eBook