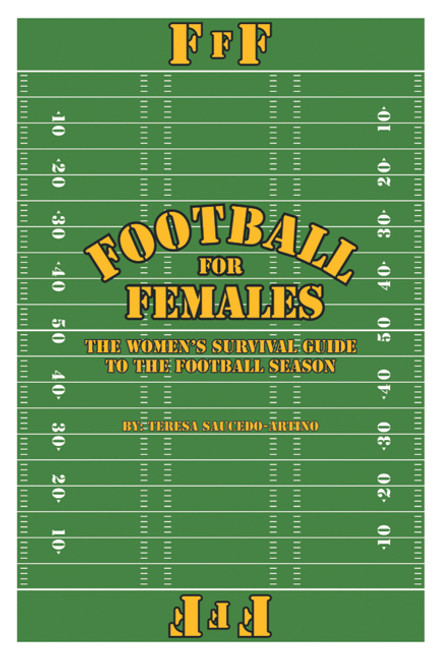 by Teresa Saucedo-Artino Are you tired of being a football widow? When the announcers call attention to the tight end, do you search the screen for a man with a nice read end? Would you like to join in the fun but are embarrassed by your lack of knowledge of the sport of football, even though you know youre smarter than most of the men who sit in you living room Sunday after Sunday? Faced with a husband and three sons who live for and love the sport of football, Teresa Saucedo-Artino knew she had to learn the difference between the offense and the defense pretty darn quickly to keep up and to keep involved. She found the game to be logical (for the most part) and interesting (overall) and felt that women simply had not been given the chance to fully understand this game of rules and regulations. Football for Females: The Womans Survival Guide to Football Season is Saucedo-Artinos tongue-in-cheek look at the world of football and a bright, funny introduction for women to the game. Filled with all the information a woman will need to not only understand the game but also knock the socks off her testosterone colleagues, Football for Females is a great primer for anyone new to the sport male or female and a deliciously funny read (even if you dont care a thing about receivers and running backs). Join Teresa Saucedo-Artino in Football for Females and send the men into the other room for the dip and pretzels when a good play is about to happen! ABOUT THE AUTHOR: Enduring twenty-plus years of watching live, taped, replays, and highlights of professional, college, high school, and Pop Warner football, Teresa Saucedo-Artino was prompted to write Football for Females: The Womens Survival Guide to the Football Season. As the only female in a house of four males, Saucedo-Artinos choices were simple: watch the game and be clueless; live a lonely life; or learn the game. She is hopeful her work will bring other women back into the living room with their men soon! A lifelong resident of Rolling Hills Estates, California, who holds a MBA in finance and a CPA, Saucedo-Artino is the COO/CFO of a high-tech information technology company. A member of Women in Technology International and former president of the Palos Verdes Little League, she enjoys gardening, knitting, sewing, and quilting, as well as spending time watching football with the men in her life. (2001, paperback, 90 pages)
×

For the Love of Pumpkins: A Cookbook