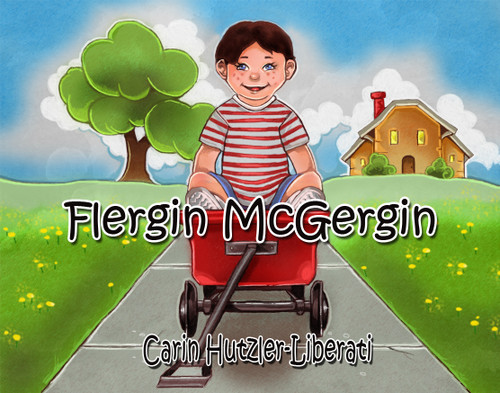 As an early-childhood educator/reading specialist for more than twenty years, author Carin Hutzler-Liberati, M.Ed., has found that a skill most children are deficient in is their ability to rhyme. Rhyming is an early emergent skill associated with phonemic awareness. Phonemic awareness is the ability to hear and manipulate sounds without seeing letters in print. It is a precursor to phonics. Phonetic proficiency produces successful readers. As an educator, it is her goal to encourage children to read and to want to read! How fun to have an adult model fluent reading and rhyming via a young boy and his desire for a puppy!

The idea for Flergin McGergin came from a game Carin played with her three young sons: Miles, Mario, and Roman. At bedtime, she would read a favorite book to them and then they would play the rhyming game. Carin would say a real word and they would give her a real word rhyme. They would also play with nonsense words. One night, not too long ago, her youngest son, Roman, said to her, Mom, are you Flergin McGergin? She responded with, Flergin McGergin, the little boy said!and the rest is history!

Carin Hutzler-Liberati, M.Ed., has received many degrees and rewards. These include a bachelor of science degree in education from the Indiana University of Pennsylvania; a master of education in reading from the University of Pittsburgh; Pennsylvania Teacher of the Year Finalist, 2012; and Pennsylvania Teacher of the Year Semi-Finalist, 2011. Carin is also the founder/director of Jeremiahs Closet, a community clothing bank for underprivileged men, women, and children. She was a graduate student researcher at the University of Pittsburgh / LEADERS Project and a member of Kappa Delta Pi Honor Society in Education. Carin is a reading specialist for the Pine-Richland School district in Gibsonia, Pennsylvania. She lives in Cheswick with her husband, Dan, and their three sons: Miles, Mario, and Roman.

For a Moment - The Best Up in Smoke