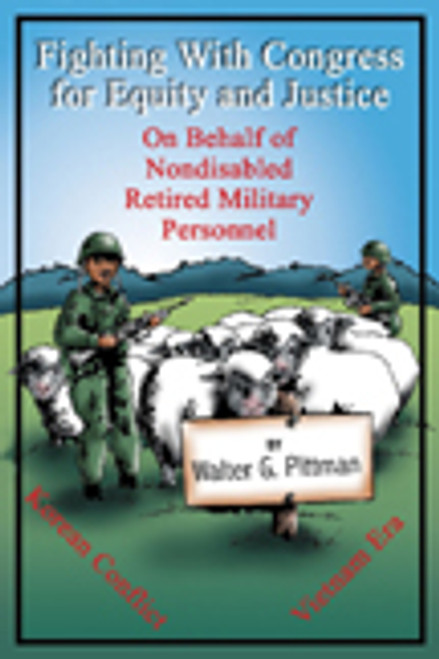 by Walter G. Pittman The members of the armed forces of the United States are the cornerstone of our freedom, keeping us secure by protecting us from threats both here and abroad. Why is it then that dedicated veterans such as Walter G. Pittman do not get the benefits they deserve benefits Mr. Pittman argues are due to him according to the law? Mr. Pittman believes he was denied his Veterans Preference credit for the wartime service he performed in the United States military, and his case is compelling. He traces the laws, regulations, and judicial precedents with meticulous care; he recounts his attempts to be heard by our elected representatives; and he provides form letters and guidelines that can be used by the reader in claiming his or her rightful benefits. Anyone who has ever dealt with federal government bureaucracy will appreciate and learn from Mr. Pittmans struggles in Fighting with Congress for Equity and Justice. About the Author: Walter G. Pittman was drafted into the U.S. Army in 1951 to serve his country in the Korean Conflict. After returning home, he earned a bachelor of science degree from Alcorn A&M College, Lorman, MS. He taught at Carver Elementary School during the 1956-57 school year, and then enlisted in the navy, where he completed several schools of training. He served through the Vietnam Era, retiring from the military on September 24, 1974. Now a retired civil engineer, Walter G. Pittman enjoys reading, writing, and being an advocate for people who have legitimate problems that need resolutions. A member of the Palma Ceia Baptist Church in Hayward, California, Mr. Pittman and his wife, Pearlie, have raised three daughters: Sylvia, Sheila, and Sonia. (2003, paperback, 396 pages),
×