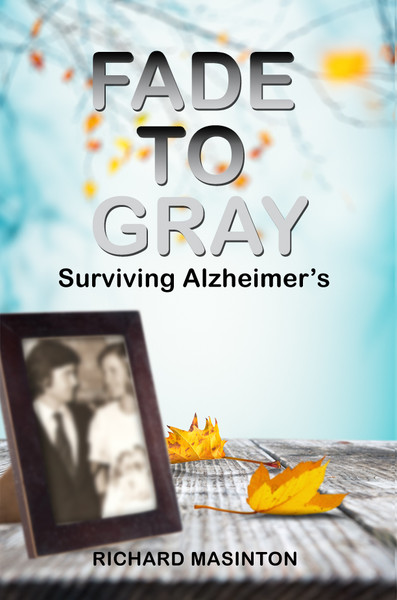 My wife, Dana, was stricken with early-onset Alzheimer’s disease at the horrifyingly young age of 55.

Fade to Gray is our story about dealing with the only disease for which modern medicine has no means to prevent, cure or slow its progression. Shock, disbelief and overwhelming emotions followed her diagnosis with a disease we thought only happened to the very elderly. Furthermore, I was appalled to discover that the business of Alzheimer’s care is broken. Caring and competent caregivers are hard to find, and assisted care facilities and other health care institutions that pride themselves on caring and competence are often anything but caring and competent.

I refused to accept “business as usual” in confronting and dealing with this terrible illness, so Fade to Gray was written to share my challenging experiences and offer hard-earned lessons learned during Dana’s struggle. With no chance to alter the outcome, my purpose is to offer practical help, comforting wisdom and enduring hope to those whose lives are ruined by Alzheimer’s, hoping to alter what may otherwise seem a hopeless experience. This is not a story about how to COPE with Alzheimer’s. Fade to Gray was written to help others DEAL with and MANAGE a disease that is becoming a public health epidemic and an ineffective support infrastructure that annually costs families more than sending a child to Harvard!

Richard Masinton was born in a small town in the mountains of south central Colorado. He was educated at the University of Oklahoma and holds a Master’s Degree in Economics. His successful business career includes experience with several of the most famous companies in America: Exxon, Arthur Andersen and Russell Stover Candies.

Richard was eagerly anticipating a busy and fulfilling retirement with his adored wife, Dana, when she was diagnosed with early-onset Alzheimer’s disease at the age of 55. No previous training, expertise or business skill could have possibly prepared him for the chaotic path that lay ahead, but his business-like approach to challenges changed the experience of Alzheimer’s for both he and Dana. He wrote Fade to Gray, his first book, to help his readers in practical, thoughtful and insightful ways, and to change for the better their experience with this devastating disease.

Richard is a resident of Colorado, but flees the winter cold for Arizona.

A husband documents his wife’s battle with Alzheimer’s disease and offers help to other caregivers in this debut memoir. Masinton’s wife, Dana, was about 56 years old when she was diagnosed with Alzheimer’s. The author first began to suspect that something was wrong when Dana, a realtor, began to struggle with reconciling her bank account and following recipes. The couple sought multiple medical opinions over a two-year period before Alzheimer’s was formally diagnosed. During this time, Masinton also observed a significant personality change, with Dana becoming “increasingly irascible.” The memoir charts Dana’s deterioration and the escalating pressures placed on the author as the primary caregiver. Masinton candidly discusses the triumphs and failings of the medical system, the difficulties of finding a suitable part-time helper, and the painful moment when admission to a residential care facility became the only option. With the intention of providing Alzheimer’s caregivers a “roadmap” of what to expect, the author also supplies plenty of worthy, practical advice on topics such as long-term health care insurance and Medicaid. This is a thoughtfully conceived memoir. As the straight-talking narrative unfolds, Masinton includes passages in italics that represent “the voice of reason,” which provide knowledge he has accrued through “painful experience.” The author pulls no punches, as when presenting the realities of home health care agencies: “If they destroy their relationship with you, they simply move to the next name on their waiting list, so don’t expect remedy or remorse in this purely seller’s market.” Readers expecting a more nurturing approach may be deterred by Masinton’s bluntness: “It is a fight to get through every hour of every day, with the only certainty being that tomorrow will be worse.” But others will find solace in recognizing their own struggles in his unflinching account. Delivered with a strong, convincing authorial voice, the counsel presented here will stay with readers, particularly regarding the importance of self-preservation: “You’re not going to be able to do anything, much less help anyone—especially the one you care so much about—if you kill yourself in the process.” Bold in its approach, this book could prove an invaluable lifeline for caregivers seeking guidance. Forthright, edifying writing about Alzheimer’s caregiving.