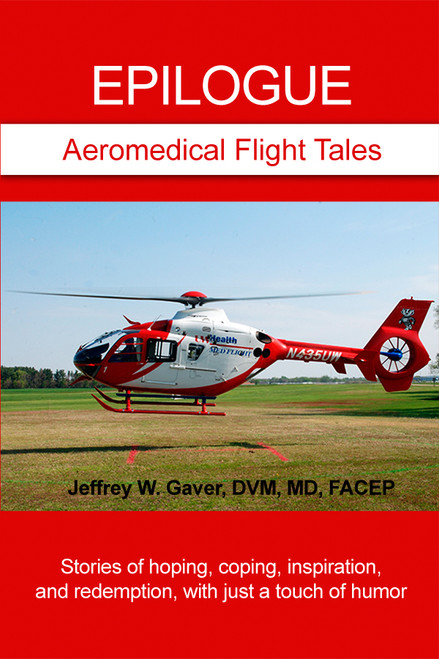 A medical helicopter is not an uncommon sight for most of us. We see and hear them overhead often enough that we no longer glance up at them. We see them sitting off to the side at large events, their crews seemingly always vigilant despite the lack of activity. We see them in action on the evening news, taking off from or landing near the scene of an accident. Occasionally, we see one in action up close, hopefully as a spectator rather than someone in need of medical attention.

We see these machines and the people who operate them, but we almost never get to hear their stories – until now. After 20 years and over 5,000 flights, flight physician Jeffrey W. Gaver, DVM, MD, FACEP has experienced the highs and the lows of the job more times than he can count. He has saved many lives and also watched as they've faded away despite the efforts of him and his team. Fly with him as he revisits the best and the worst days of his career as an elite flight physician in Wisconsin.

Jeffrey W. Gaver, DVM, MD, FACEP received a veterinary medical degree (DVM) from the University of Minnesota. He completed a residency in small animal medicine and surgery at Purdue University. After practicing Veterinary Medicine for several years in the Oconomowoc, Wisconsin area, he became interested in international health. Through his Rotary Club, he developed a project in Haiti and led several medical mission trips there. He received several awards and honors for his international service.

Upon his return, Gaver worked on his MPH (Master in Public Health) degree at the University of Minnesota and then entered medical school and received his medical degree (MD) from the University of Wisconsin, Madison. He completed a residency in Emergency Medicine at the Medical College of Wisconsin, where he served as chief resident. After practicing emergency medicine for five years, he returned to Aurora Sinai Medical Center and completed a residency in internal medicine. He then practiced primary care as an internist in Oconomowoc, Wisconsin, for twenty years. He also worked for two years as an internist at the Aurora Sheboygan Medical Center. Throughout his career, he flew weekly as flight physician at UW Med Flight, in Madison, Wisconsin.

Gaver has served as medical Director of the Road America Race Track in Elkhart Lake, Wisconsin, for 22 years. Following retirement, Gaver worked with Diversified Care as an Urgent Care Physician. In 2014, he moved to Sun City, Arizona. In January 2015, he joined the medical staff of Health Services at Arizona State University (ASU). He serves there as an urgent care and primary care physician in student health. He also worked with the Department of Animal Care Technology providing medical consultation and occupational medicine services. He actively teaches Advanced Life Support classes. He interacts through clinical mentoring and lecturing with the MAYO internal medicine residents that rotate through the student clinic in the young adult medicine rotation. Additionally, he is chairman of the Pandemic Medical Sub-committee for ASU. He continues as a race track physician at several events each year.