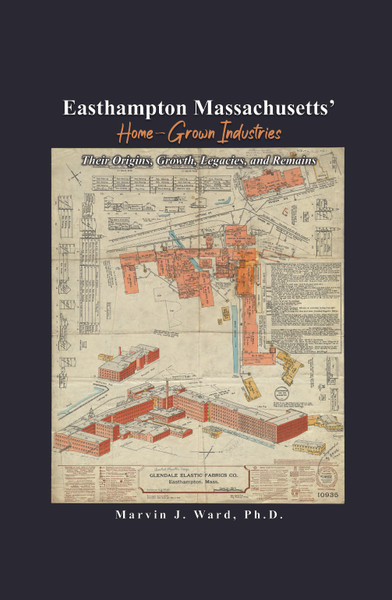 Easthampton Massachusetts’ Home-Grown Industries documents the history of all the industries, several of them interconnected, that were established in the Town of Easthampton at the start of the Industrial Revolution in Western Massachusetts, beginning, in c. 1824, with a piece-work enterprise operated from a home with an office and small warehouse, proceeding, in 1834, to an industrial manufacture, initially in an existing factory in another town, and moving into the first factory being built in the town in 1847-1848. Most were started by Samuel Williston, who had different partners, although many of those had their hands in more than one, and some of them took over one or another of them. All of them were situated on property that Williston owned, having inherited it from his father, Payson, the first minister to settle in it, who bought a large tract of “18 or 19 acres” of land in 1790. It tracks them through to his death in 1874, and that of his wife, Emily (née Graves, from nearby Williamsburg; her family’s property is also tracked), founder (in 1881) of the town library, in 1885. They manufactured the first products of their type in the US in the case of the first three, and in this region for the others, some having international exports and reputations. Williston was also involved in many civic endeavors: he funded numerous initiatives, including a school, a church, the Town Hall building, and a cemetery, to name the major projects; he was not a tycoon who spent lavishly on himself. The story unfolds, Sherlock Holmes-style, with documented facts, unraveling some mysteries, and destroying some tales that are myths and/or apocryphal, commonly believed among today’s residents, some of which took root in early 20th century sources that are also, Sherlock Holmes-style, undermined. In the 20th century, other industries, many larger, moved there, all moving or expanding from their former locations, some reassembling their buildings that were disassembled there and brought along, all of these on the West side of the Lower Mill Pond, North of the location of the first ones, and alongside the railroad that ran beside the Pond (today a Rail Trail); they are not treated here. None of either exist today, but many of their buildings have been or are being repurposed, except for one that is part of the factory of an industry not entirely unrelated to the one for which it was built.