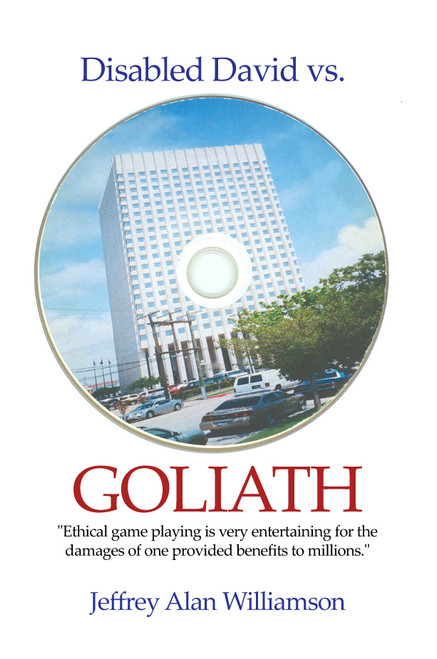 "Whether left, right, liberal, conservative or independent what actually rules the United States of America? If impaired find the four letter word in the dictionary that controls everything."

Imagine that you are employed by your insurer. Imagine that your employer is the biggest insurance provider in the country. Now imagine what might happen if you were seriously injured, even disabled, during your time of employment, and your dual employer/insurer wanted to get rid of you as a liability.

Welcome to the world of Jeffery Alan Williamson, who dealt with an intracranial hemorrhage, ongoing seizures, a stroke, a craniotomy, comas, rehabilitation, and reoccurring seizures and impairments over a ten-year period of time. Throughout that time, his employer/insurer, the American National Insurance Company, behaved in ways so unethically that Williamson was compelled to represent himself pro se in a disability discrimination lawsuit against them for their illegal and unjust actions against him during and after his time as an employee with the company.

Representing himself in civil and federal court despite what he suffered is Williamsons motivation for writing this book. He hopes to motivate society and to help readers realize just how capable they are.

Jeffrey Alan Williamson lived in Naples, Italy, while he served in the U.S.M.C. He will always miss and admire Europe. He has a degree in business administration from Houston Baptist University. He loves fitness and considers tennis and volleyball among his favorite sports. He enjoys the outdoors, especially mountains and oceans. He loves to travel and has always admired kids and animals. When considering all of the jobs hes had, teaching children how to play tennis was by far his favorite. He considers it a privilege to have worked with them for their ambition and motivation.

From David to David - eBook

Do You Know What Wildcats Do at School in P.E. Class?: Wildcats' First Day in Class