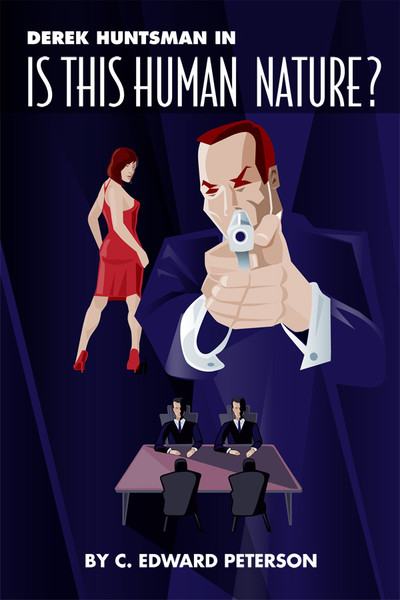 Derek Huntsman In: IS THIS HUMAN NATURE
by C. Edward Peterson

An accountant supervisor is murdered in what appears to be a senseless parking garage robbery, leaving her teenage daughter and mother grasping for meaning in the tragedy. Her mother, a former Philadelphia detective, senses that things are not as they seem. Uncles and cousins, most involved in some form or another of crime busting, reunite at her funeral and work together to foil the mystery of who killed her and whybefore its too late and more innocents are killed.

With very few clues and leads, cousin Derek and his partner, Mickey, try to track down missing files from a supposed blackmailer while getting tangled in a web of corrupt investment brokers, businessmen, and political figures; hit men thugs; a crooked detective; and a European hit man with an ever-changing alias. As they race to find whos the mastermind behind it all, they realize that everyones a suspect in this case: even one of the F.B.I.s own detectives!

Born in the year 1948 in Philadelphia, Pennsylvania, C. Edward Peterson was educated within the Philadelphia Public School system. A product of one of the street gangs of North Philadelphia and an avid student of history, he was also a participant in the 60s and 70s movement for Human Rights and later worked to end youth violence in Philadelphia. He has participated, witnessed, and survived in tumultuous times. He is also a retired twenty-eight year Philadelphia Municipal civil servant.

As an author, he has written two booklets on the subject of the Black Panther Party. Now he takes on the murder mystery genre.