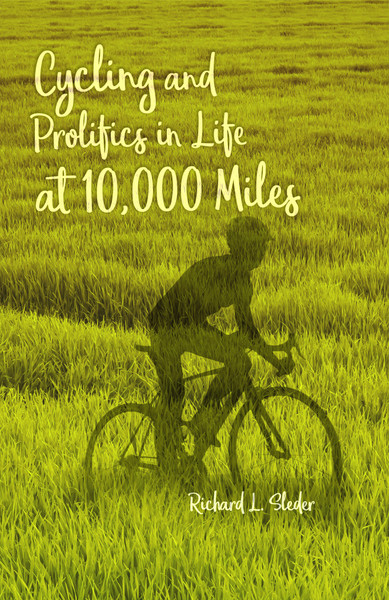 In the United States, bicycle commuting has seen a fifty percent increase in the past ten years. Cycling as a means of fun and convenient transport, improved strength and wellness, and as a force for benefiting and improving our society for our children and grandchildren, is empowering and can be a source of pride, honor, and moral strength, and fortitude.

Unfortunately, politics is trying to put the brakes on cycling. The current administration recently removed White House bike racks and continues to ignore critical global warming facts. It ignores smart science that would ensure our continued prosperity and happiness in the short-term as well as long-term.

Throughout this book, Richard L. Sleder describes the world he discovers on two wheels. He sees riding as a means to more mobility, independent production and reconnecting with the world around us. The benefits are numerous. Including thoughts and insights, the author also shares journal entries and letters he’s written to improve his path and the path for those around him.

Richard L. Sleder is a political journalist, editor, and founder of a company that advocates globally for alternative, multi-modal transport solutions. He commutes by bicycle. He’s ridden in Europe, Eurasia, the Far East, and the Americas. He is a lifelong cyclist who, in the past few years, has averaged over 11,000 miles in each season, which includes winning three consecutive year-long local challenges and placing in the top 30 in U.S. in 2016 in the year-long National Bike Challenge. He recently won an international commuter challenge, having ridden over 1,700 commuter miles this past October.

Richard is an active member of many transport and environmental groups including those to advance economic growth, global peace, and security. In addition to being an avid bicyclist, Richard is also a prolific organic gardener. He and his wife have one daughter. This is his first published book.