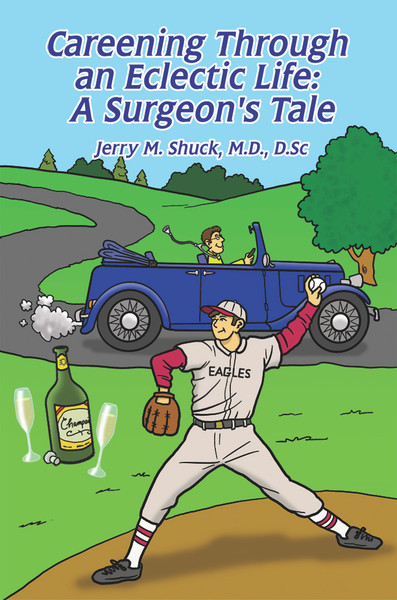 Careening Through an Eclectic Life: A Surgeon’s Tale

Careening Through an Eclectic Life: A Surgeon’s Tale is a collection of stories from author Jerry M. Shuck’s life. He was inspired by two high school friends and teammates from Cincinnati to write a book after hearing his telling of some of these stories. The events depicted in this autobiography include Shuck’s time in professional baseball, his experiences as an army surgeon, and many moments from his fifty-year surgical career. Follow along and enjoy the read as the author describes his most amusing and meaningful memories.

Author Jerry M. Shuck, M.D., D.Sc was born in 1934 during the Great Depression. He received a full scholarship to the College of Pharmacy at the University of Cincinnati (U.C.). As a pharmacist, he was able to work his way through medical school at U.C. During his long surgical residency, Shuck also earned a Doctor of Science (D.Sc.) degree. In 2009, U.C. awarded him the Distinguished Alumni Award.

Shuck spent two years in the United States Army immediately following his surgical training. He spent the next twelve years in the Department of Surgery at the University of New Mexico, rapidly rising to full professor. Later in life, he was invited to give the keynote address at the celebration of the 50th anniversary of this department. In 1980, Shuck was recruited by Case Western Reserve to serve as Professor and Chairman of the Department of Surgery at the medical school and Director of Surgery at University Hospitals of Cleveland. He fully retired in Cleveland in 2014. The author and his wife, Dr. Linda W. Shuck, a retired surgeon, have lived in Shaker Heights, Ohio, for the past forty years.

They have five children and eight grandchildren.

Careening Through an Eclectic Life: A Surgeon's Tale - eBook