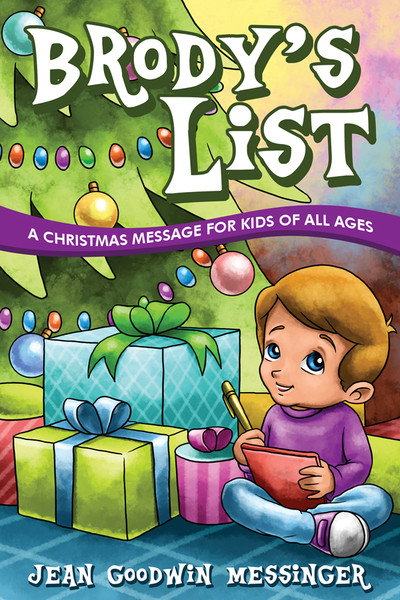 Brody's List: A Christmas Message for Kids of All Ages
by Jean Goodwin Messinger

Christmas Day was almost overturkey and other delicious foods were eaten, family gatherings came to a close, gifts were already opened, and little Brody was ready for bed. His mother, as always, talked to him about his day and noticed that something was wrong. Brody confided that he had fun because he got what he wantedthe snow, his family, his giftsbut his friend, Jason, hasn't. Both of them wished for a skateboard and catchers mitt, but Santa seemed to favor certain kids.

Finding that Brody was deeply puzzled with what seemed to be a sad Christmas for Jason and the rest of the Martins, his mother made a game in which she promised a reward. She listed seven names of people in their neighborhood on a piece of paper, whom Brody had to visit to ask what Christmas meant. And so Brody set out to play, learning different things as he reached the last name on the list. At the end of the day, Brody, at a very young age, discovered that Christmas really wasnt the same for everybody.

The issue that troubled Brody and prompted his treasure hunt game was one that concerned me a lot as I was growing up, the author says, while my belief in Santa Claus was unshakeable. The people he visits represent people and situations I have known personally, and readers may relate in the same way. Simplistic as the story is, I hope it carries a meaningful lesson to believers of all ages.

Jean Goodwin Messinger is a retired teacher. She earned her bachelors degree in art history at Lawrence College in Appleton, Wisconsin, and finished her masters degree in art and architectural history at Denver University in Denver, Colorado. An author of seven other books, Ms. Messinger also enjoys gardening and music. Jean has seven grandchildren.