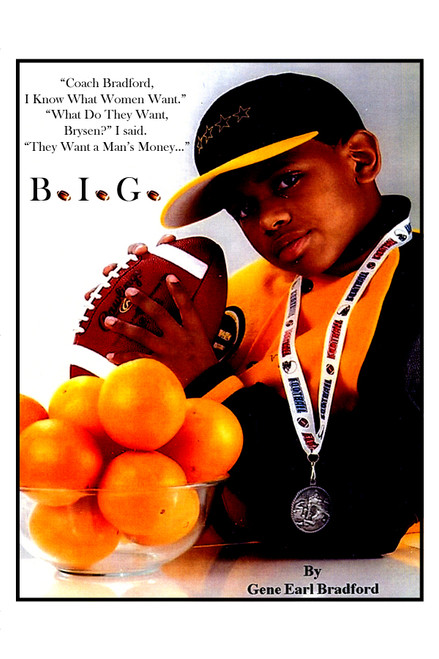 BIG is an inspiring story of one youth and his mentor as they learn from each other in the arena of both football and life. Coach Bradford seeks out young and underprivileged talent in the form of Brysen Isaial Graham, who comes from a single-family home. Brysen, also known as B.I.G., is as skilled in football as he is in frankly assessing his ever-going world. Coach Bradford understands this, taking it upon himself to hone Brysens talents.

Together they combat the surprisingly unfair politics of youth football. In doing so, Coach Bradford learns much about youth and the importance of children. This experience inspired the compilation of BIG. The shared experience will open eyes to the mentally and sometime physically abusive world of youth sports. Perhaps more importantly, BIG will inspire a respect and understanding of the drive and resourcefulness of young athletes and their families.

Gene E. Bradfords personal history is steeped in the culture of football. As pictured, the author was part of the1995 team that won the Heisman National Championship in the Shriners Crippled Childrens Classic in Doraville, Georgia. In 1993 he won the Coach of the Year Award from Mathew Dickeys Boys Club. His winning record includes six consecutive Super Bowl Championships in addition to three National Championships in the states of Florida and Georgia.

Born in Memphis, Tennessee Gene E. Bradford now resides in Missouri. He is a Vietnam veteran having served three years as a Marine at sea aboard the U.S.S. Coral: SEACVA43. He moved forward from his military career earning a B.S. in Administration of Justice from the University of Missouri, St. Louis and an additional degree in Law Enforcement from Forest Park Community College. Gene E. Bradford is, of course, an avid football fan.

Other published works by Gene E. Bradford included the best seller, We Can Do More.

What All Women Need to Know: From Teens to Menopause - eBook

What All Women Need to Know: From Teens to Menopause -HB

What All Women Need to Know: From Teens to Menopause - PB