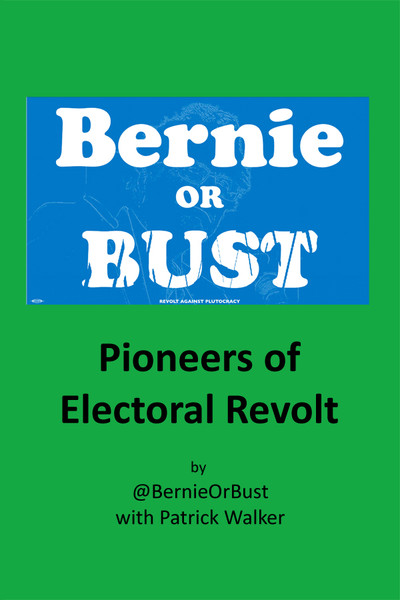 By: @BernieOrBust with Patrick Walker

Political organizers Victor Tiffany, aka @BernieOrBust, and Patrick Walker started the Bernie or Bust movement of 2016. This book does much more than tell the story of how they accomplished this feat. In addition to correcting the record of distortion created by the corporate media about the movement, the authors:

The essential first and last three chapters are of great concern to voters and all people who want to better comprehend the provocative dynamics of past and future elections. Bernie or Bust: Pioneers of Electoral Revolt also provides a first-hand account of the initiation and operation of an innovative, unprecedented grassroots, Internet-based political strategy. Useful to activists and of interest to historians, the memoir chapters 2-9 give a remarkably nuts and bolts picture which will be of interest to other activists and organizers. Owners of this unique text are encouraged to #ShareThisBook after finishing it.

Bernie or Bust: Pioneers of Electoral Revolt provides a first-hand account of the initiation and operation of a grassroots political strategy.  The memoir chapters  give a remarkably nuts and bolts picture which will be of interest to other activists, but the first and last three chapters address voters and all the people who want to better comprehend the provocative dynamics of the 2016 election.

Victor Tiffany cut his teeth with political activism during the nuclear freeze movement of the 1980s. When the Citizens United v. FEC decision was handed down in 2010, he became involved in the movement to get a constitutional amendment passed by Congress to make it clear money is not speech and corporations should not have the rights of human beings. By 2014 he came to realize American plutocracy would never be outlawed and democracy legalized without a revolution. Building the nationwide Bernie or Bust movement was a labor of love for him.

Patrick Walker—a political revolutionary, activist, strategist and writer—is also co-founder of Revolt Against Plutocracy, the co-creator of the Bernie or Bust pledge and, most recently, a founding member of the Progressive or Bust movement. A veteran anti-fracking and Occupy activist, his writings have appeared in CounterPunch, Salon, Truthdig, OpEdNews and Nation of Change.

Acclaim for Bernie or Bust: