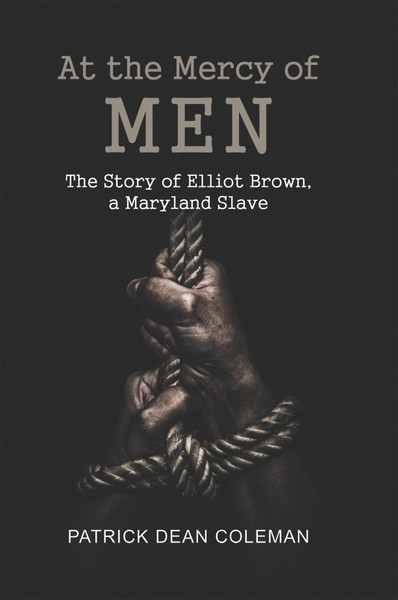 At the Mercy of Men

At the Mercy of Men is a novel based on actual people, places, and events related to the life of Elliot Brown, an enslaved African-American who lived from approximately 1828(?)-1868. The exact date of his birth is unknown. The novel is a result of five years of extensive research. It is the direct result of the author’s interest in the life of a slave who lived and worked on the same property in which he once lived.

It is important to remember that slavery was legal just four or five generations ago. It is also important to conceive of enslaved African-Americans as real human beings who walked the same streets and built a lot of the infrastructure that still exists all around us today. At the Mercy of Men is focused on outlining the life of one of America’s ancestors and endeavors to keep the sense of place and time, while also maintaining a modern conversation.

Patrick Dean Coleman retired from the federal government in 2014, after serving for 22 years. He worked on economic issues at several departments, including the Department of Labor, International Trade Commission, and Department of Commerce. His did his last 12 years of service at the White House, working in the Office of the U.S. Trade Representative, in the administrations of Presidents George W. Bush and Barack Obama. During that time, he specialized in African affairs and travelled extensively throughout Africa, negotiating international trade agreements and strengthening U.S.-African trade relations.

A native New Yorker, Patrick Dean Coleman was born in The Bronx. He completed a Bachelor of Arts degree at the State University of New York at New Paltz, majoring in international relations and French. Mr. Coleman went on to receive a Master of International Affairs degree from Columbia University in New York City.

Patrick Dean Coleman has struggled with the challenges of kidney disease and dialysis since 2012. He is an amateur historian, focusing on American history, including slavery and Reconstruction. Mr. Coleman currently lives in Rockville, Maryland, and is the father of a 25-year-old son.

Trek to America: Angels of Mercy

At the Mercy of Men: The Story of Elliot Brown, a Maryland Slave - eBook

When I Thought I Had It All