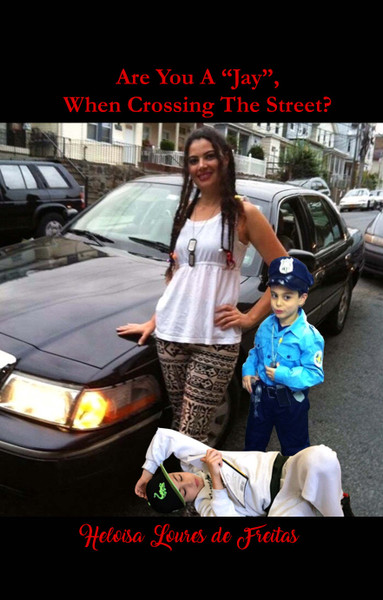 WELCOMING GOD’S PROTECTION: Though our children’s superhero, we, parents, can’t protect them from all harms, like when an intruder invades their school. God, on the other hand, can; as He can be in all places at all times. This book will tell our children that we seek God’s protection for them, when out of their reach; and therefore, encourage our loved ones to cling to God themselves, when in danger. Are You A “Jay”, When Crossing The Street? will assure our children they are never alone.

THE IMPORTANCE OF THE “JAYWALKING” SUBJECT. Every one and a half hours, a pedestrian gets killed by a car. In 2015, a total of 5,376 pedestrians died, and 129,000 were treated in emergency departments. Wet/Icy grounds; darkness; inattentive, unskilled, and/or drugged drivers; and malfunctioning vehicles can all add to this data, making of committing a jaywalking crime a risk beyond financial loss; making of it a life risk. Are You A “Jay”, When Crossing The Street? awakens pedestrians to the preciousness of their lives.

YES, YOU CAN REMEMBER: “Are you too young, old, or distracted to remember information?” “Did a brain injury, or post traumatic stress disorder affect your memory?” “Were you diagnosed with Alzheimer’s disease?” The memory techniques displayed in Are You A “Jay”, When Crossing The Street? are meant to lead you to memorizing its plot despite your mental disabilities; it works because it contains visual, auditory, and kinesthetic cues; homographs (Words with same spelling, but differing meanings); and repetition. Before giving up on your memory, give this book a try; it might happily surprise you!

HELOISA LOURES DE FREITAS was raised as Catholic, but abandoned her faith in God in 2005. She considered herself an atheist for one year, then discovered Buddhism in 2006. In 2012, she asked Jesus for specific signs of His existence and received them, driving her to accept Jesus as her Lord and Savior, and return to her Christian faith. She got baptized by The Holy Spirit in her home, and later an African-Brazilian minister confirmed her, as a prophet, inside a church. She studies the Bible daily! Heloisa Freitas has studied criminal justice three times in her life, starting with courses in Brazil, then additional college work in the U.S., and passed the police officer’s written test in both Brazil and U.S., which deepened her understanding of the law. The author home-schooled herself in psychology from 2006-2012, and used all three backgrounds in this book to help others.

Are You A “Jay”, When Crossing The Street? - eBook

Why Do You Want to Be a Worm When You Can Be a Butterfly? - eBook

An Unspecified Spectrum of Poems