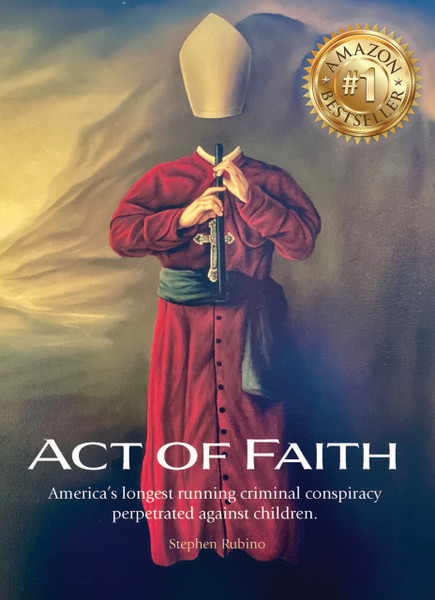 In his debut novel, trial attorney Stephen Rubino takes the reader on an electrifying journey of deceit, intrigue, tragedy, passion and ultimate redemption. At the intersection of the sacred and the profane, Act of Faith dissects the Vatican’s complicity in America’s longest criminal conspiracy perpetrated against children. This multi-generational family saga is richly portrayed through an ensemble cast of unforgettable characters, revealing the secret world of the Vatican’s sheltering of sexual predators to avoid bringing scandal to the faithful. Act of Faith offers an unflinching account of the still emerging sexual abuse scandal plaguing the Catholic Church and its impact on the survivors and their families across America. The story chronicles the lives of siblings Francis and Elizabeth Natale, who suffer unspeakable psychological damage after being sexually abused by their trusted parish priest. As adults, Francis and Elizabeth become estranged, each hiding their secrets in dangerous double lives. He as a gifted pianist and sexually conflicted Catholic priest, she as a reckless but highly successful trial attorney. After resigning her partnership in a major New York City law firm, Elizabeth sets out to uncover the roots of the abuse scandal and to exact her personal revenge. On a serendipitous road trip across the country, Elizabeth confronts her lifelong demons and forms an unlikely alliance with Father Thomas Atkinson, her long lost high school love who has become a Vatican whistleblower. After a tense reunion with Francis, the trio enters the super-charged environment of high stakes litigation, exposing the Church’s centuries old practice of hiding sexual predators in plain sight from the religious faithful and law enforcement. Together, the trio brings to the courthouse steps the first Federal Civil Racketeering lawsuit against the Catholic Church.

Stephen Rubino is a practicing attorney who filed the first Civil Racketeering case against the Catholic Church in 1993. For the last thirty-five years he has represented hundreds of abuse survivors throughout North America and the Canadian Arctic. For seventeen years, Mr. Rubino served as chairman of the Childhood Sexual Abuse Litigation Group of the American Association for Justice. In 2008, Mr. Rubino was a finalist for the Public Justice Foundation’s Trial Lawyer of the Year Award for his work in the Los Angeles Archdiocese and San Diego Diocese Catholic Abuse Litigation. In 2014, he received the Pioneer Award from the Survivor’s Network of Those Abused by Priests (SNAP). His work has been widely profiled in print and broadcast media and he has lectured extensively on the intricacies of the cover-up and how America’s Bishops have used draconian statutes of limitations to suppress what would otherwise be viable claims against the Catholic Church.

“Fast paced and elegantly written, Act of Faith offers a deep dive into the truth about the corruption at the highest levels of the Catholic Church. Drawing on his decades of experience, Act of Faith brings to life tragedy, horror, suspense and ultimately, triumphant survival. A work of fiction woven in the harsh reality of fact. A must have volume for any history on the scandal.”

“Spellbinding! This captivating novel conveys the epic courage of Catholic sex abuse victims who came forward in the early 90s, when no one wanted to believe them. Never has the story of these early whistleblowers been told with such feeling, and small wonder –Rubino knows this story better than anyone.”

“Act of Faith is a legal thriller, adroitly plotted by a practitioner who knows the snakes and daggers that threaten cases seeking true justice. Layered into the suspense, Rubino advances the riveting story of an Italian family awakening to painful secrets that bring them to a profound spiritual reckoning.”

-Jason Berry, author of Lead Us Not Into Temptation

“Act of Faith captures a new perspective on the heartbreaking account of crime and coverup in the 1980s Roman Catholic Church in America. Through the compassionately told stories of survivors and the crucible of the courtroom, Rubino brings the reader into the rarely seen lives of those that have lived this nightmare. The stories reveal deeply held secrets and soul-crushing betrayal by Church leaders time and time again.”

Lawyers are generally not known for their narrative prose. Nor is the sexual abuse of minors by those who minister in the name of God generally thought a proper topic for works of fiction. But Stephen Rubino, a New Jersey lawyer who was among the first generation of advocates to sound the alarm about the widespread concealment of sexual abuse in the Roman Catholic Church, upends these assumptions in his new book, Act of Faith. It is a must-read for those seeking to understand the effects of clergy sexual abuse on victim-survivors, their families, and their communities.

Rubino’s book examines these dynamics through the fictional Natale family, Italian stonemasons for many generations. In the late 1950s, Joseph and Lucy Natale, their two children Elizabeth and Francis, and their extended family are living in Washington, D.C., where Joseph and his father Giovanni are toiling to createintricate stonework for the National Shrine of the Immaculate Conception. Like many Italian Catholics of their generation, much of the Natales’ life revolves around church activities, and clergy are regular guests at the family home. When a new priest, Father Dolan, arrives unexpectedly at the Shrine, he finds his way into the family’s confidences and, taking advantage of the trust his clerical status confers, abuses both children physically, psychologically, and spiritually. When one of the children dares to acknowledge the abuse, the immediate fallout has life-changing consequences for the Natales, as well as for senior clergy who look the other way.

The second half of Rubino’s narrative jumps forward to the mid-1990s, when the Natale children are fully grown. Francis has become a priest, Elizabeth a successful corporate attorney on track to make partner at a time when few women were afforded that opportunity. Each in their own way has repressed their childhood horrors, sublimating them in work, worship, and sex. For much of the book, Dolan’s abuse forms a barrier between the two siblings, their silence forcing them into separate circles. Triggered unexpectedly, Elizabeth begins to investigate what happened not only to her but to countless other children whose lives had been upended, and in some cases ended, by abuse at the hands of clergy. Along the way, she assembles an unusual cast of supporting characters: a priest in recovery from alcohol addiction who explains the scope of the church’s cover-up, a sympathetic attorney, and a loyalcanine. Together, they confront members of the church hierarchy who, we discover, had long ago wormed their way into the Natale family’s confidences.

It is clear that Act of Faith represents many of the destructive forces Rubino encountered in his decades of legal practice on behalf of sexual abuse victim-survivors and their families. Only someone who has sat with survivors, heard them tell their stories, investigated churchly wrongdoing, and grappled with the many devices religious institutions have to shield themselves from responsibility could produce a narrative such as this. Both through Elizabeth and Francis and through their kin, Rubino shows how sexual abuse by religious leaders can destroy bonds of trust within a family and leave people with emotional demons that can torment them the rest of their lives. And the reverberations echo well beyond the family: accusations of abuse, as Rubino poignantly demonstrates, can split a community between those who believe complainants and those who do not wish to speak ill of their priests. Act of Faith gives attention to the dynamics on the other side as well. In a series of chilling scenes, Rubino depicts church leaders callously negotiating the transfer of predator clergy in order to preserve their reputation—then adjourning for a beautiful meal, a Broadway show, or several exquisite bottles of wine. He makes clear that the path to preferment in the church has often depended on a cleric’s ability to keep secrets and engage in doublespeak—practices that, while at first merely uncomfortable, ultimately twist the soul and destroy the moral compass.

This book is long—clocking in at nearly 600 pages, perhaps longer than it needs to be. Some passages, especially as Elizabeth comes to grips with the scope of the violence the church has perpetrated, are more didactic than literary, with extended explanations about history and law. Rubino places most of these in the mouth of a character clearly based on the heroic Dominican whistle-blower Tom Doyle. Some of the characters’ discussions about legal procedures for holding the church accountable, likewise, may prove too technical for fiction. (Although, having written about church institutions’ attempts to evade legal liability for clergy sexual misconduct, it seems to me Rubino makes a very strong case for applying the civil RICO statute—originally enacted to combat organized crime—to certain churchly conspiracies.)

But these weaknesses detract only slightly from Rubino’s main contribution, which is to depict the flesh-and-blood consequences of clergy sexual abuse in ways that newspaper reports and court documents may be unable to do. The reason I found Acts of Faith difficult to put down is that in the members of the Natale family, Rubino has created characters who struggle with real suffering; their wounds simply will not go away, and it is impossible not to feel with them how deep the pain goes. Acts of Faith gives readers the rare opportunity to see the clergy sexual abuse crises through the eyes of one who has walked with victim-survivors on this hard road. Stephen Rubino deserves our thanks, not just for his candor as an author, but for the years of steadfast advocacy that made it possible for him to write this book.

Patrick Hornbeck is interim dean of the Graduate School of Arts and Sciences and professor of theology at Fordham University, where he is a member of the J.D. Class of 2022 in the School of Law. He is on Twitter @PatrickHornbeck.