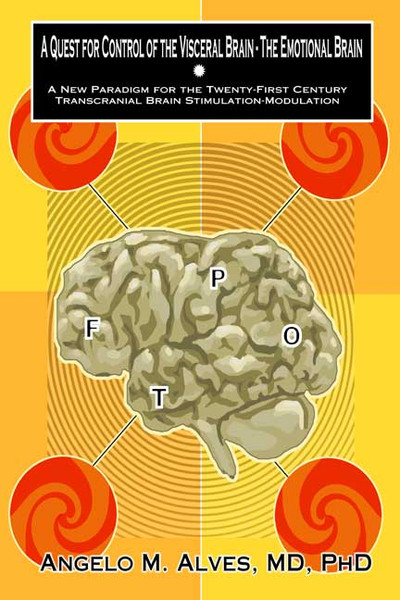 by Angelo M. Alves, MD, Ph.D. In his doctoral dissertation, Dr. Alves discusses the effects of transcranial brain stimulation (TBS) and proposes a new noninvasive method. Through his own brain mapping and low-dose stimulation (below seizure threshold) with electric, magnetic and laser beams, Dr. Alves believes that TBS can substantially lessen the symptoms of neuropsychiatric disorders, such as OCD and major depression, as well as chronic pain, epilepsy, and even Parkinsons disease and stroke. For the patients who do not respond or cannot tolerate traditional medications, his noninvasive method could replace other invasive neurosurgical procedures. Until now it was necessary to produce epileptic seizures for the treatment to be effective, notwithstanding the problems associated with traditional brain stimulation, such as memory loss. As researchers learn more about the generation and expression of emotions, this may become the preferred treatment in the future. ABOUT THE AUTHOR Dr. Alves was born in Portugal and came to the United States in 1964 for his postgraduate medical education, after obtaining the degree of Doctor of Medicine from the University of Porto, Portugal, in 1962. He moved to Florida in 1972 after extensive training in Neurology, Neurosurgery and Psychiatry in different American Institutions. In May of 2005, he obtained his Ph.D. degree in Neuroscience from Kennedy-Western University. His novel ideas for the improvement of Neuroscience in the twenty-first century make this book an ideal source for consultation and teaching purposes, and it should be a must in any medical library. He has been practicing in St. Petersburg, Florida, since 1972. Dr. Alves and his wife, Nicole, have four children and fourteen grandchildren. His interests include hard work and brain matters (2008, paperback, 304 pages)