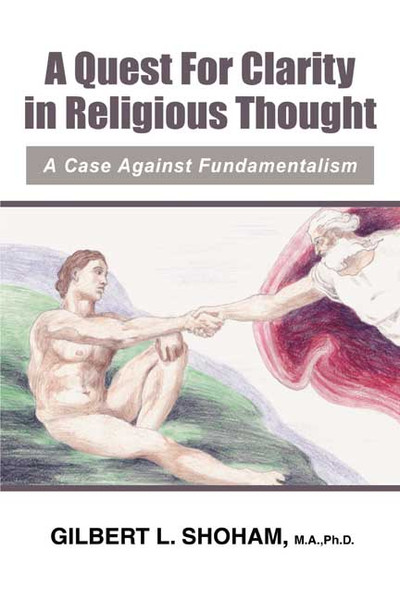 by Gilbert L. Shoham, M.A. Have you ever questioned the existence of God or other central figures of religion? We all have. In A Quest for Clarity in Religious Thought, Gilbert L. Shoham, M.A., Ph.D, authenticates religious life alongside reason as expressed in contemporary philosophy, and describes values, commitment, and thought as part of a realistic and cogent religious perspective. Dr. Shoham argues that the existence of God, morality, sectarian religious obligation, and religious experience are definitive expressions of humanity. For the reader who is concerned over his religious convictions or searching for historical truth, Dr. Shohams A Quest for Clarity in Religious Thought provides well-researched and thought-provoking insights into central aspects of contemporary religion. ABOUT THE AUTHOR Gilbert Shoham was the head rabbi at the Kehilath Israel Synagogue in Kansas City, and he is a retired adjunct professor of philosophy at the University of Missouri in Kansas City. He earned his bachelors degree from the Yeshiva University in 1951 and received his rabbinic ordination from the Rabbi Isaac Elchanan Theological Seminary of Yeshiva University in 1953. Since that time, Shoham has earned a masters degree in philosophy from McGill University in 1964, a doctorate in philosophy from the University of Southern California in 1976, and a masters degree from the University of Missouri in Kansas City in 1983. A native of Baltimore, Maryland, Gilbert Shoham and his wife, Sharon, an attorney and historian, now live in Overland Park, Kansas. Shoham has been a member of the Rabbinical Council of America since 1956, and he is also a member of the Rabbinic Association of Greater Kansas City. In his spare time, Shoham enjoys history and paleoanthropology. A Quest for Clarity in Religious Thought is his first published book. (2005, Paperback, 86 pages)