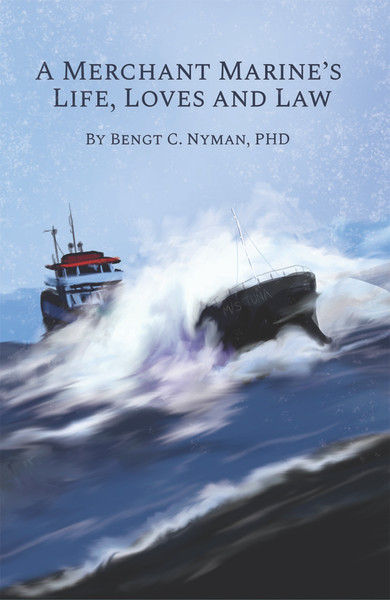 When Bengt was sixteen years old, his mother finally agreed to sign the authorization for him to join the Merchant Marine. Bengt was hired as a cook/sailor on the ship M/S Tuna, a 200-ton Swedish coastal runner, where he learned the rules and regulations of being a sailor. For the next four years, he sailed the seven seas with M/S Kirribilli, M/S Sabang, and M/S Parrakoola through dangerous seas, hostile shipmates, and even an engagement with a beautiful Japanese girl. During some home visits between the ships, Bengt needed to protect his mother from her alcoholic ex-husband and was in a serious car accident.

Bengt’s mandatory military service was in the Swedish Navy. After eighteen months, he applied and was accepted to the United Nations Peacekeeping Forces and was assigned to the island of Cyprus in the Mediterranean Sea. This was a thrilling time when the Greek armada was on its way to attack the island of Cyprus.

After the UN, Bengt became a family man in Sweden. He purchased a tractor trailer business that caused him financial difficulties because of a tax increase of 1000% that was added on his business. He filed bankruptcy, and then went on to fulfill his dream to become an attorney. He moved to the United States, married his wife, Diane, and became a U.S. citizen 1991.

He continued his law practice in the U.S., helping European clients while continuing to educate himself. He became a Florida Supreme Court mediator until he had to discontinue the practice because of medical reasons.

Bengt was born during World War II to a Swedish soldier and a young woman. When the war was over, his parents divorced, and he was raised by his mother and paternal grandparents. His grandfather, the mayor of Brunflo, Sweden, was a strong role model for Bengt.

During his travels as a Merchant Marine, Bengt met many interesting people and had many exciting adventures exploring the seven seas. He continued his adventures during his time as a Corporal in the United Nations Peacekeeping Forces on Cyprus.

Bengt earned his PHD as a Swedish attorney, eventually moved to the United States and became a citizen in 1991 where he resides with his wife of nearly 30 years.

It Was Amazing Grace

Steps of Faith: My Journey of Following God One Step at a Time

So I See You Don't Paint Houses

Storytelling from Boyhood and Beyond