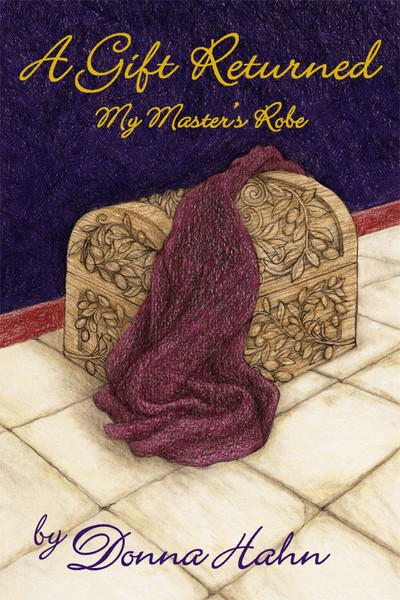 A Gift Returned
by Donna Hahn

A Gift Returned was inspired by a personal search of the scriptures, which revealed to the author the personal relationship that developed between the earthly family of Jesus Christ and His chosen disciples and followers during His three-year ministry.

Certainly, the most positive evidence of a close relationship occurred at the foot of the cross, when Jesus asked His beloved disciple, John, to care for His mother following His crucifixion.

The author desires, using scripture as a foundation, to share this historical novel, and hopefully providing an interesting account of this period in the life of our Lord.

The authors intention is to offer the reader imaginative scenarios that might have occurred between the mother of Jesus and the Roman centurion, who retrieved His robe following the crucifixion, and then his determined crusade to return it to her before he is recalled to Rome.

The author wants to clarify that there is no intention to alter or change scripture. The aim and goal is, hopefully, to give new believers and young people a lucid insight of His thirty-three years on Earth and to inspire them to make their own personal search of the scriptures.

Finally, each story needs a storyteller. The author has chosen James, the half-brother of Jesus. He alone had the opportunity to experience and gain knowledge of the entire life of Jesus. He was reared in the same household, grew to manhood, and, following the crucifixion and resurrection, became a believer in the deity of Jesus. He became very involved in the early Christian movement, working with the apostles and Saint Paul, and becoming a pillar of the Church.

Keeping this in mind, come and let James take you on a spiritual and historical trip, revealing truths you might not have known.

Donna Hahn was born and raised in Indiana. She married and became a stay-at-home mother to her two daughters. After her late husbands retirement, the two of them moved back to her hometown where they both became active members of the church and community activities. In 2007, Donna lost her husband to cancer and her daughter to cardiac arrest; now at the age of eighty-six, she remains strong, grateful, and happy with the support of her other daughter, grandchildren, friends, and God.

A Gift from God

A Glimpse Into the Heart, Mind, and Soul