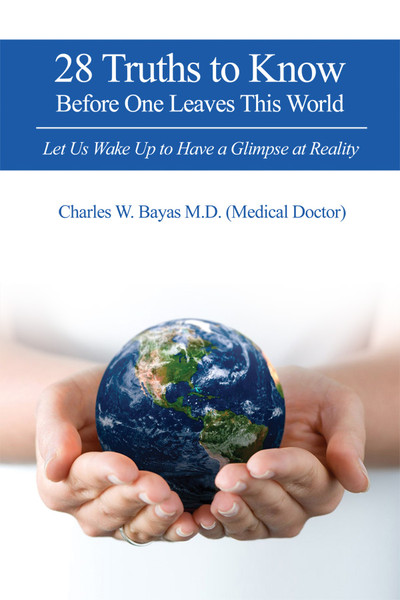 28 Truths to Know Before One Leaves This World: Let Us Wake Up to Have a Glimpse at Reality
by Charles W. Bayas M.D. (Medical Doctor)

Cremation, breastfeeding, the feminist movement, an extraordinary look at medication, mans relationship to man, animals, plants, and the entire cosmos, and much that we know and take for granted as given assume an intriguing treatment in this current work.

There has been a multitude of research probing the human situation, many of them taking the holistic approach that 28 Truths to Know Before One Leaves the World at first glance seems to thread. Yet, a page later, one could glimpse the entirely different approach Charles Bayas has taken on this one.

Prepare to be challenged by the views presented here, as perhaps can hardly be seen in other works dissecting the same issues.

Born in Port-au-Prince, Haiti on November 13, 1923 from a Christian Catholic family and the third of six children, Charles finished medical school of Port-au-Prince. He spent three years in Haiti to bring healing, comfort, and hope to his fellow Christians. He married Florence Giordani, a visiting nurse who later bore him one son and one daughter, all while in the middle of economic and political instability in the country. He left Haiti with his family for the USA, where he continued to serve and help the community up to the year 1989, at which time he retired from the University of Miami and Jackson Memorial Hospital as family physician. In 2009, Charles lost Florence to cancer and Alzheimer's disease, a tragic event in his life. The loss of his wife and his firm belief in God, however, inspired him to write this book.