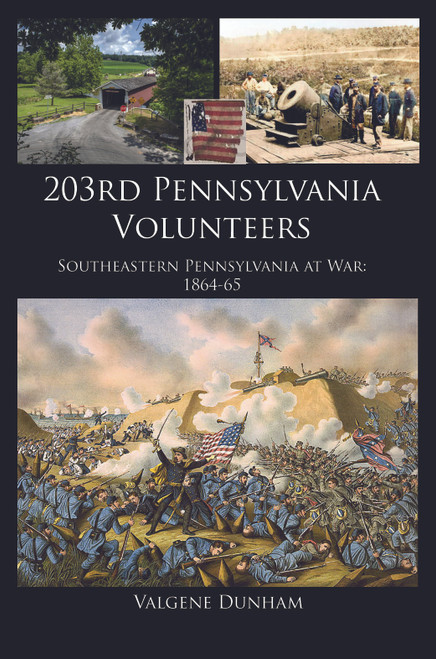 203rd Pennsylvania Volunteers is the history of a reserve Civil War regiment that was enlisted from Southeastern Pennsylvania in September 1864. Originally intended to be a special regiment of Sharpshooters, the unit was altered when their commander, General David Birney died before the regiment was completely formed. The author, a retired biologist, introduces the book as a newcomer to Southeastern Pennsylvania who wishes to understand the natural, societal, and cultural characteristics of the region that led young men to enlist so late in a war that was not going well for the Union. Consequently, the book presents the history of the area that involves the influence of early geological formations, Native Americans, various religious movements, and the importance of farming and related industry. In addition, the book includes past military heroes from the area during the Revolutionary and Mexican Wars.

The regiment is traced through its training at Camp Cadwalader, near the present Philadelphia airport, and its journey to the front in Virginia. This first book written about this regiment serves to emphasize the importance and flexibility of reserve regiments in the last year of the Civil War and how men from the farm and the city came together in a fighting force. The regiment paid a tremendous price in the Battle of Fort Fisher on the North Carolina coast so far away. The involvement of local groups of men enlisting together is presented in a chapter about the music of the Civil War in which eleven members of the New Holland Band, Lancaster County, joined the 203rd together to make up one half of the regiment’s band.

This is the third book the author has written about the Civil War, all started by his receiving his great-great-grandfather’s letters home before he was killed in the Battle of Hatcher’s Run II in the afternoon of February 6, 1865. The author trusts that this book about the men of Southeastern Pennsylvania will stimulate interest about the war and an understanding of how the region prepared those Men in Blue for their heroic efforts in saving the Union.

Valgene Dunham’s hobbies include reading, watching sports on TV, and Shetland Sheepdogs—he’s owned seven over the years. He enjoys community activities, such as church choir and teaching. Dr. Dunham, Ph.D in plant biochemistry, has teaching/research/administration experience at Purdue, SUNY at Fredonia, Western Kentucky and Coastal Carolina. He was president of the South Carolina Academy of Science, 2001-2002.