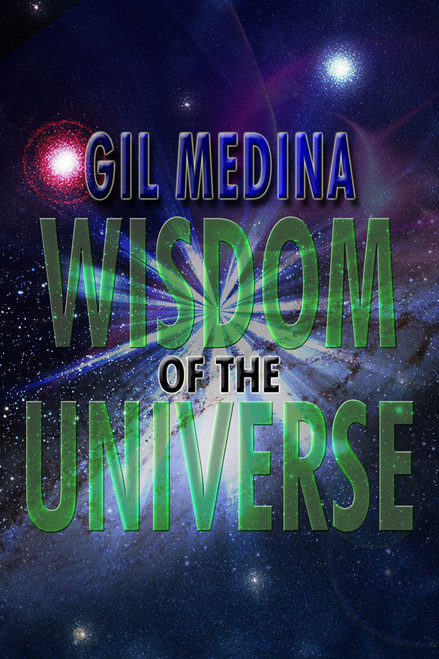 Wisdom of the Universe
by Gil Medina

As a child, Martin Molina receives instruction from a saintly mystic who appears inexplicably in the city where Martin lives. As Molina develops profound philosophical insight, he also experiences lifes discontents, from unrequited love to the loss of people he loves.

Then fate makes Molina the unlikely but perfect agent to investigate suspected bio-terrorists. Rather than Muslim fundamentalists, the prime suspects turn out to be the leaders of the worlds major corporations who have set in motion the mass extermination of the wretched of the earth, whom they deem a threat to the worlds elites.

As Molina helps to mobilize a UN response to the work of the Multilateral Coordinating Commission, he discovers that someoneor somethingwas using the Commission as a subterfuge to conceal a much more sinister conspiracy aimed at defeating not just humanity but the human spirit as well.

Molina and law enforcement agents battle the Commission, even as Molina is forced to wage a metaphysical war against evil. He soon learns that weapons and courage alone will fail the human race. Only through the exercise of our freedom to make correct moral choices can we hope to renew the world.

Will the exercise of free will become a weapon of mass salvation? Read Wisdom of the Universe, Gil Medinas sci-fi thriller, to find out.

Gil Medina is a professional who has participated in the formulation of public policy in various capacities including as the Secretary of Commerce for the State of New Jersey, as the Vice President for International Business Development for a Voice-Over-Internet-Protocol telecommunications company, as the President and General Counsel of a biotechnology company, and as a senior executive with the worlds largest privately held commercial real estate company. He is an attorney and CPA who has developed extensive expertise in international trade, technology, government and politics.

As Co-chairman of the New Jersey Republican State Committee and a delegate to several Republican national conventions, he worked on many political campaigns and was elected a City Councilman in the City of Camden, NJ. Both in his private and public capacities, he worked with heads of state and CEOs of multinational corporations to promote investment and trade. He was responsible for organizing trade and investment missions and opening representation offices abroad. He participated in the World Economic Forum, the WTO Ministerial Meetings in Seattle in November 1999, and other major international meetings dealing with world trade and investments.

In 1999 the President of Brazil conferred upon Gil the Rank of Commander in the Order of Cruzeiro do Sul. This is the highest honor bestowed on foreign nationals by the Republic of Brazil, in recognition of valuable services rendered to the Republic and its citizens.

Wingtips Under a Bolivian Poncho